The 2-Word Solution for Every Blocked-up Genius 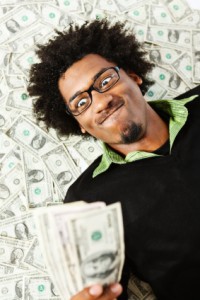 Get a pen ready. You’ll want to write this one down.

You’re writing a masterpiece. It’s going to be the best thing written, ever, by anyone. It’ll be epic and entirely original. Every sentence will flow with wit, while being as tight and crisp as the prose of Hemingway.

If world-shattering wasn’t a cliché, that’s what this writing would be.

Every publisher will want a piece of you. You won’t have to do any marketing besides sending your finished piece to the first agent listed in Writer’s Digest, who will instantly recognize your genius.

You accept that a few publishers might reject you. This is the cross any good writer must bear, and it’s only fair. The first Harry Potter book was rejected 9 times before being published  Watership Down notched up 26 rejections. Stephen King’s first novel, Carrie, took 30 rejections before hitting shelves.

But your writing? That book will be an instant, worldwide hit. Bookstores will be looted because of the words you’ve written.  You’ll need to open a bank account in Switzerland to cope with your newfound wealth. And you’ll need to flee to your European mansion to escape the media frenzy and find some peace.

The only trouble is that you haven’t written a single word. You’re a blocked genius.

The masterpiece is still in your head. You’re keeping it there in pristine condition. You haven’t yet wanted to dirty it with pen and ink, or word processors and typos.

One day you will.

You wish you could do it today. But you can’t.

Want the solution? Brace yourself; it’s only two words. And grab your pen to write it down.

I hate to break it to you, but you’re probably not a genius. And if you are, you won’t become one by writing a masterpiece.

Write an article for a magazine. Write fiction. Write publicity materials for your two jaded clown-friends and their bankrupt Russian circus.

But please, put the masterpiece to bed.

Don’t try to write a tour de force.  Write an excellent, publishable article. Write horror fiction that gives you nightmares.  Write publicity materials so good that the two clowns become a sell-out act and can afford to employ a knife thrower, a fire eater, an acrobat, a juggler and a trapeze artist.

Forget the masterpiece. There’s no need to be amazing, unique or original. Just use what works.

Remember, Dickens didn’t write masterpieces. He wrote serialized fiction to entertain the masses. Dostoevsky didn’t write to get rich.  He wrote to pay off his gambling debts. And the Bronte sisters? They wrote because they just liked telling stories.

So stop it. And just go write something you enjoy, and write it well.

David is a digital writer, storyteller, vagabond and dreamer based in Swansea, Wales. He traveled the world hunting for a damn good story and discovered brilliant stories are everywhere. To brighten your day with more storytelling goodness you can (and should) follow David on Twitter.