7 Tips Pros Use To Get Words on the Page 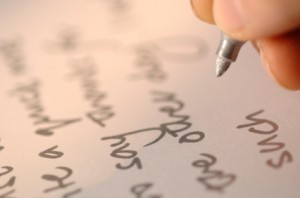 “I am a lousy copywriter.”

So said one of the all-time great ad men when describing his work. And really, that doesn’t surprise me, because he followed that up with “I am a good editor.”

(How great an ad man was he? A half-century after his heyday, he still gets an occasional mention on Mad Men. The guy couldn’t even type—but he could produce a “gush” of copy.)

True confession now: On my first draft, I don’t even try to be a good writer. Usually it takes more than a few sheets of white paper and garlands of red ink before my work is good enough for the public eye.

And that’s true whether I’m writing an ad, a news article or a personal essay.

So if you’re an AW (amateur writer, i.e., you don’t write for a living), you should be encouraged, because you can take the pressure off yourself when you sit down to write. All you need to do is throw enough words on the page to edit.

But for AWs, even churning out enough raw material for editing—never mind producing a published piece—can be daunting. That requires gagging your inner critic and freeing you inner creator.

So how about learning from the pros? No two writers work alike, but Stephen King or Malcolm Gladwell may have a trick or two that will work for you. Get out of your own way, and you too can “gush.”

The key is to glue the seat of your pants to the seat of your chair—fabric glue works best—and not move a muscle not needed in the act of writing until your time is up. I have a note above my computer that says Stay seated. Many writers use timers to force themselves to keep to the clock.

So how long should you write? When you’re starting out, try a non-stop, 20-minute session. By the time the sand grains have all fallen through the hourglass, you may not even notice.

Other writers opt for a certain amount of output each day. Stephen King is known as a prolific writer and no wonder! King writes 10 pages a day, every day, no matter what. That’s 3,650 pages in a non-leap year, enough to fill a library of books and stories over a lifetime.

So go ahead: See how fast you can fill an MS Word page or churn out 500 words. Don’t worry about choosing the right word, matching the subject and verb, or deciding where the comma should go. If you worry about that when you’re writing, you’re weaving through stop-and-go traffic instead of cruising down the freeway.

Don’t even stop to do research. Write as much as you can and then insert XXXXX and ????? for the bits you don’t know. Go back later to fill those in. It’s much faster and offers less potential for distraction.

The idea is to spill until your brain is empty and your ideas are splattered across the screen. You can choose the best words for your thoughts during the polishing rounds.

If you work at home like I do, you can find an almost unlimited number of reasons to put off writing. Likewise if you work in an office, you’ll find distractions of a different sort that will keep your words from reaching the page. So take your cue from Malcolm Gladwell, author of The Tipping Point, Blink and Outliers, and write in a café.

As someone who writes in a café, Gladwell admits disliking people who write in cafés. There is a stigma in being thought of as one of those people – people conspicuous by their very immersion in the act of writing. But if you produce, who cares if some java junkie thinks you’re a poser?

Once I settle down at the local Break Café with my laptop and my latté, I’d look strange staring into space. So I write. I may see a few people I know, but chances are they’re not going to disturb me beyond a hello. And unless the conversation at the next table is riveting, the repetitive hum in most coffee shops compels industry.

If a coffeehouse doesn’t suit you, try the library, a train or even a bar. Hemingway said he never wrote while drunk, but that shouldn’t limit you.

Most writers don’t start writing at A and stop at Z. Lolita author Vladimir Nabokov wrote on index cards, all while standing up. Trust me, if I had to write standing up, I’d write only short bits too. But Nabokov wrote each scene on a separate index card in the order it came to mind, then rearranged the cards to tell the story he wanted.

Go ahead and sit when you write, but when you have an idea, a sentence, a paragraph that you know you’ll need later, jot it down. Keep a file: a Word doc, a notebook, a note on your iPhone, whatever works for you. Later when you’re ready to get serious about weaving words together, you won’t be facing a blank page.

Although I’m not much on outlining—I get tangled up in the numbers and letters—I do create lists of topics I know I’ll want to include. Often that’s enough for me to know how to structure a piece. But if you don’t get the order right from the start, you can still move chunks of text of almost any size later. Just ask Nabokov.

Is it writing if you’re speaking? Who cares, if it works. National Book Award winner and New York Times essayist Richard Powers claims he hasn’t touched a keyboard in years, not even to write an email.

Of course, Powers relies on the extraordinary transcribing ability of today’s voice-recognition software. When I dictate a note on my iPhone, it usually captures what I say perfectly.

Long before speech recognition, authors dictated their books to secretaries or stenographers. Not only did they avoid the torment of writing in longhand or typing on a clickety-clack manual machine, they also heard the cadence and inflection of their words well before they reached the world.

So if you’re far more comfortable spewing than scribbling, find a microphone and start talking.

Without the Black Eyed Peas, I’d weigh 10 pounds more. That’s simply because, without background music, I’m not inspired to work out. Likewise, many pro writers use music to transport themselves into the zone. Some romance writers even use special themes for each character.

And why not? Both writing and music depend on story and rhythm (yes, even nonfiction). But for most writers, the words in vocal music get in the way—so they write to classical or instrumental music.

That seems a bit tame to me, so instead I listen to pop or rock or jazz in a language I don’t understand. Recently a friend turned me on to the TuneIn Radio app, which may become the new soundtrack for my work.

Pick music that uplifts you or fits the mood of your piece. Then see if it makes your neurons spark and your digits fly better than empty silence.

What’s the flow? It’s the feeling that comes when you’re totally absorbed in your writing and your words spill onto the page effortlessly. Generally there’s a time and place that can make that happen for just about anyone. Hemingway wrote in the morning; de Balzac woke at midnight and wrote for hours fed by an unending supply of black coffee.

A decade ago, the much-less-famous writer you’re reading now wrote best from 10 pm to 1 am with a glass of wine. Today it’s amazing how inspired I become by 4 pm if I realize I either write or I don’t eat.

So try writing at different times and places until you find the flow for yourself. Notice when and where it happens and then make it happen again and again. Not only will you write faster in the flow, but you’ll also write better.

And that can be downright addictive.

PS: So who’s the “lousy copywriter”? The singular David Ogilvy, head of the iconic firm Ogilvy and Mather. Read more about his creative process in Ogilvy’s letter to Mr. Ray Calt.

Diana Kightlinger is a top copywriter and marcom strategist who gushes in the EclipseWriter blog. Follow #eclipsewriter on Twitter to find out what she’s thinking and doing.