What a Camera Can Teach You About Customer Service 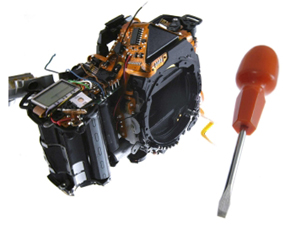 I bought a Kodak EasyShare digital camera for my teen this Christmas. She was thrilled. She popped in a memory card, took a picture… and the camera shut off.

My daughter took the memory card out, put it in our other camera, and took a few shots. It worked fine. We tried the new Kodak again – no luck. It shut off, only this time with the zoom sticking out about four inches. We also couldn’t get the camera to turn back on unless we removed the batteries and put them back in.

Dad will research and solve the problem! He’s crack at that stuff. But Kodak has a conspiracy. The camera didn’t come with instructions. The website technical information is useless, basic, or hidden. Multiple hours of searching and many attempts to get the camera to work resulted in a big, fat zero.

Dad is smart. Dad will email Kodak directly! Surely they can help and win over a customer.

“Have you replaced your batteries?” Ahem. We had, in fact, replaced batteries four times, because Dad discovered the camera is an energy hog. (So have many other consumers, based on the multitude of poor reviews found during research.)

“Your memory card is corrupt,” says Kodak next. No, in fact, the memory card is not corrupted. It works just fine on our other camera (which is a Kodak EasyShare, too).

“Can’t we just take it back, Dad?” It’s now January 5, and my girl is disappointed to have a gift she can’t use. She’s been patient for two weeks.

Lesson Number One: Know When to Give Up

So off we go to WalMart. WalMart takes everything back. They’re good guys. We love them. (Actually, we can’t stand them, but WalMart is the only store going in this one-horse town. They’re making a lovely profit off our backs with their cheap-ass quality crap.)

“We can’t do anything,” the clerk at the photo lab informs me. “Your receipt is 11 days old. Our new store policy is 10 days.”

Them’s fightin’ words. “Well, I’m not happy with my purchase. I want to exchange it. It doesn’t work. It was a Christmas present, and my daughter,” she perks a little before assuming dramatic expressions of great woe, “wants to use her camera.”

The clerk takes the camera, dumps the batteries out and puts in new ones. Then she turns it on and snaps a picture. “Works fine for me.”

“Well, it doesn’t work fine for me.” I explained the problems with the zoo, the power going off, and how the camera sucks back batteries like a Quebec hockey player swills beer.

“Your receipt hasn’t been marked as a Christmas present purchase,” the clerk sniffs. “Our clerks all know to mark “Christmas present” on the receipts when they know about it.”

Lesson Number Four: Don’t blame someone else to save yourself.

I explained that the clerk who served me when I bought the camera had known it was a gift. I’d mentioned it to him. He hadn’t written anything on my receipt.

“If the employee didn’t do what he should have, why does this become my problem,” I asked. “Is this my fault? How am I supposed to know that he should’ve written something on my receipt? No one told me.”

Bonus lesson: If someone in the company didn’t do his job, it’s the company’s responsibility to fix it – not the client’s.

“We can’t take it back,” the clerk persisted. She’s getting snotty, too. “Call Kodak and see if the company will exchange the camera. We don’t build them. We just sell them.”

Not acceptable. WalMart is a huge company able to absorb the cost of a defective camera and with the network connections to return it to the manufacturer. I am one guy with two kids to feed and rent to pay.

But I’d play along. I asked what the clerk suggested I do while waiting for Kodak to resolve my problems. She recommended I purchase a second camera from the store.

I was stunned. “You’re telling me that I should trust you guys twice and put myself out about $700 in the hopes of getting half of that back?”

I protested. I protested at great length and rather loudly. I told the clerk exactly what I thought of the store’s policies and treatment of customers. The lineup of people behind me grew, and I saw a few consumers nod in agreement with me.

The clerk, eyeing the crowd, grudgingly agreed to take back the defective camera. She called the manager to advise him of the exchange, turning her back slightly as she muttered comments about the “guy who won’t go away.”

I had to raise an eyebrow at one bit of conversation I overheard. “No, he’s right,” the clerk admitted. “It doesn’t work.”

This whole situation could’ve been handled by a more positive attitude, some empathy and the clerk working with me towards a solution. I would most likely have been willing to compromise and been friendlier with the clerk.

The customer is always right. That statement doesn’t mean the customer’s desired resolution to a problem is possible – but dammit, try. Find a solution. Be nice about it, too. If a client isn’t happy, he isn’t happy. Making him even unhappier and angry is just bad business.

I ditched the camera, thanked the clerk for her assistance… and bought a Fuji from another store.