How Breakfast at Tiffanys Teaches You to Become a Classic Writer 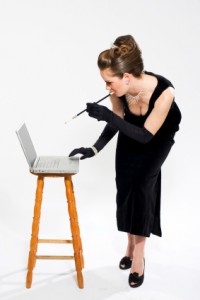 If I asked you the question, “What’s the movie Breakfast At Tiffany’s about?” you’d probably say something like this:

“Isn’t Audrey Hepburn in that? And doesn’t she really want to have breakfast at Tiffany’s?”

Yes, she is, and yes, she does, but those things are not, in fact, what Breakfast at Tiffany’s is really about.

Breakfast at Tiffany’s is about overcoming discouragement and fear. It’s about achieving a unique, compelling style. And most of all, it’s about fierce, do-what-you-have-to-do love.

In short, it’s about everything you need to succeed in your writing life.

How to Fight Off the Mean Reds

In Breakfast at Tiffany’s, Audrey Hepburn’s character Holly Golightly describes the difference between “the blues” and what she calls “the mean reds.”

“The blues are because you’re getting fat and maybe it’s been raining too long, you’re just sad, that’s all. The mean reds are horrible. Suddenly you’re afraid and you don’t know what you’re afraid of.”

As a writer, you will get the mean reds. It’s guaranteed. If you are sharing the stories that need to be shared, you will get scared. You’ll doubt yourself. You’ll consider giving up and running back to the safe little life you had before.

The mean reds are the unanticipated fears that halt your progress.

I’ve been there. When I submitted a guest post at Firepole Marketing on creating your most compelling content, I felt the mean reds sneaking up on me. I felt afraid, and I didn’t know why. I wondered if I’d been too honest, and if I’d shared too much.

Fortunately, there’s a cure for the mean reds, and you can look to Holly’s personal antidote for a clue. Her response to the mean reds is to go to Tiffany’s. But why?

In her words: “[It] calms me down right away. The quietness and the proud look of it; nothing very bad could happen to you there.”

Tiffany’s is a place of elegance, beauty, and most of all, craftsmanship.

When the mean reds strike, go to a quiet place. Think of a piece of writing that inspires you. Then, start writing. Do the work. You don’t have to finish, and you don’t have to say anything brilliant (though, once you get going, you might.) You just have to begin. You find your writing voice by…writing.

The antidote to the mean reds is proactive creation.

Contrary to popular belief, Holly Golightly’s magnetism isn’t based in the pearls or the little black dress. It’s found in her charismatic personality, her winning smile, in the bold way she moves through the world.

The same is true for you and your writing. Crafting a compelling style is about doing the unexpected and making people notice. As Holly observes, “It’s useful being top banana in the shock department.”

In today’s terms, Holly’s ‘personal brand’ is one part naiveté mixed with two parts elegance, three parts impulsivity and a dash of humor. She keeps a bottle of perfume, a lipstick and a mirror in her mailbox. She sleeps with tassled earplugs. She keeps her phone in her suitcase to muffle the sound. These are small, idiosyncratic details, yet they capture viewers’ attention. Decades later, we still can’t look away.

Consider this in terms of your website, your writing. You need to stand out as yourself, with your quirks on display. Where do you do the unexpected? How do you take your interests, your personal stories, and use them as creative fuel?

Erika Napoletano promises readers free ponies when they sign up for her mailing list. (I haven’t received my ponies yet, but that punchy little false promise made me want to subscribe.) James Chartrand adds spice to her writing with pull-you-in analogies and provocative web design. These writers produce fantastic content, but it’s the small personal touches that serve as bait to hook readers in.

Becoming a Classic Through Fierce Love

Contrary to popular belief, the emotion that motivates Holly Golightly’s character is not romantic love. In fact, the happy movie ending we love so much doesn’t exist in Truman Capote’s original story on which the film was based.

What, then, drives Holly to do all that she does? It’s sisterly love. Holly’s character is shaped by her profound, protective love for her brother, Fred. Though Fred never appears in the film, he has a deep significance for our heroine.

Fred’s disability is only hinted at in the film. Holly says that she’s saving money so that she can take care of Fred, though she doesn’t specify why he needs her help. Most tellingly, Holly says people think Fred is, “a little slow…a bit dotty…” and that, “[the Army’s] really the best place for him until I can get enough money saved.”

Despite appearances, Holly’s gold-digging isn’t the work of a social climber. It’s the desperate effort of a sister who longs to provide for her brother. The vision of being reunited with her brother is what Holly holds closest to her heart.

In order for you to succeed as a writer, YOU need to have a vision. You need to have a goal you’re so passionate about that you’re willing to humble yourself and face potential rejection for it. Underneath the glitz, that’s what Holly is doing.

Every day, ask yourself: What is it that I’d be willing to get down on my knees for?

Whatever it is, that’s what you love. That’s why you write. That’s what will keep you going when you feel like giving up.

And that’s what will make you a classic.

Caroline McGraw is a would-be childhood paleontologist who digs for treasure in people. She blogs about finding meaning in your most challenging relationships at A Wish Come Clear.