Should you pursue your Bright, Shiny Idea? 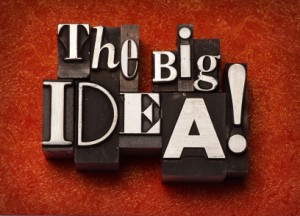 Have you ever seen people get excited about a new project?

It isn’t pretty. Someone mentions an idea that’s different, or out of the box, and there’s a small pause as it sinks in. Boom! Discussions immediately soar. People start interrupting each other, supercharged on the groupthink brainstorming. They heap on new ideas. They reject others lickety-split.

It all unfolds at lightning speed, ripping along while everyone’s eyes widen with glee, their hands fly about as they talk. “We could do this! Oh, and this! Oooooh, what about if we did THAT? Wouldn’t that be cool?!”

I once witnessed the birth of a Bright, Shiny Idea, and it left me stunned. Calm, smart people who were usually known to be quite staid and reasonable started throwing caution to the wind, feeding off each other’s frenzy until they reached fever pitch. They nearly babbled with insanity.

You can imagine what happened next: Plans formed helter-skelter. Holes began developing. The Bright, Shiny Idea grew like innocent kudzu, becoming a monstrous mess that was out of control.

I tried pointing out the issues in the plans that they couldn’t see. I felt awkward breaking up the fun, but someone had to speak up before things went too far.

Silence fell like an axe. Several sets of eyes fixed me with a flat look.

Then the group launched back into ecstatic chatter, ignoring my cautions. They didn’t want to hear any doubts about their plans. They were on fire! They waved away my concerns as if all would work itself out. They had sheer conviction; this was such a great idea, nothing could go wrong!

I’ve certainly plowed ahead into the land of dreams myself at times. You’ve probably done the same at one time or another. Excitement feels good. And Bright, Shiny Ideas give us a rush like nothing else. They’re the stuff of innovation, of new solutions and creative leadership.

Many wonderful inventions have come to life thanks to Bright, Shiny Ideas.

Many have been a total train wreck of wasted effort.

Once the initial rush of genius passes and the excitement dies down, people often slowly come to realize that what once seemed so brilliant wouldn’t actually work well in reality. Objectivity returns, logic prevails, and they can see that this Bright, Shiny Idea wasn’t such a smart one after all.

This usually happens midway through the project… after months of hard work have gone into it.

You don’t want to have that happen to you. And thankfully, you can avoid falling victim to a Bright, Shiny Idea, saving yourself hours of wasted time and effort. The process is unsexy as hell, but mitigating the hypnotic risk of being drawn like a moth to the flame is crucial to your business.

How do you avoid the addictive rush of a Bright, Shiny Idea?

By taking your time with it.

No one at Apple or Google rushes off to like mad fools to work on a sudden new idea. I’m not privy to their inner operations, but it’s likely that they have meetings – several of them, spaced out – to discuss the idea and examine the pros and cons. They probably do tons of research and produce many reports on how it would all work, what the cost would be, whether it can be done, and whether the end result seems predictably profitable.

Bright, Shiny Ideas can’t survive that process. It douses their fuel. It extinguishes their light. Careful examination, observation, research and analysis takes all the glitz away, and the result is one of two outcomes:

The idea dies. It wasn’t genius; it was some airy rainbow dream with no substance at all. It gets discarded, and everyone avoids putting in phenomenal amounts of time into a project destined to fail.

The idea lives. Transformed from its original state of hell-raising fireworks, it becomes something solid and strong that gives off steady heat, a viable project to work upon and develop.

The next time you find yourself gripped in the throes of a Bright, Shiny Idea, stop. Shield your eyes and block your ears. Breathe deeply until you calm down. Then start taking notes and using your brain.

Look at your idea objectively. Poke at it. Plan it out. Try breaking it down into all its stages, examining each one closely for cracks and pockmarks. Ask yourself questions – hard questions, the kind that make you uncomfortable, the kind that a boardroom CEO would ask.

Who would be involved in creating this? How much time would it take, realistically? What aspects are required to bring it to life? Do you have the necessary resources? How many phases to completion, and what tools or manpower would be required for each? What are the costs involved for the immediate, short, and long term? Is there clear, tangible evidence of market demand?

Ask yourself emotional questions too: Why do you want to pursue this idea in the first place? What will you get out of it? What’s appealing about it? Is it truly worth setting aside other work or projects? Can you afford the time it requires, given your current lifestyle? Does it sound exciting because it helps you avoid work you’ve been trying to avoid? Is it just tempting because it’s new and different?

Are you running away from the work you should be doing?

That’s the question you should really be asking yourself, because Bright, Shiny Ideas are often the children of procrastination. We dislike this task or that work, or a project we’ve been working on isn’t so much fun anymore. Our apathy or disengagement makes it easy to leap for something new that provides a dopamine high, and we fool ourselves into thinking that we’ve had an epiphany.

In most cases, we haven’t. We’ve just found a reprieve. Bright, Shiny Ideas are the ‘get out of jail’ card from the day-to-day work that feels more like a prison.

You need to invest your time, energy, effort and money in the best possible places – even if sometimes it feels like drudgery. They’re precious resources and the key to reaching success. Spending your time and effort chasing one bright after another keeps you firmly stuck in stagnation, going nowhere at all.

Worse, you’ll never finish anything you’ve started. Another Bright, Shiny Idea will leap out the moment your motivation lags, and it’s hiding just around the bend.

I know it’s hard to ignore the blazing flash of new ideas. But be hard on them. Be cold with them. Be realistic. Logical. Tough. Play devil’s advocate with your Bright, Shiny Ideas, and don’t let them sweep you away. Mercilessly grill every inch of them until you’ve swept away the glitz to see the truth underneath.

Only then can you decide whether you’ve discovered a worthy idea… or a will o’ the wisp trying to lead you astray.

Want to have the truly worthwhile ideas that actually do good? Check out A Whack on the Side of the Head by Roger von Oech. You'll unleash your genius with cool tricks, tips and exercises that get your creative juices flowing.