The Urban Myth of Confidence 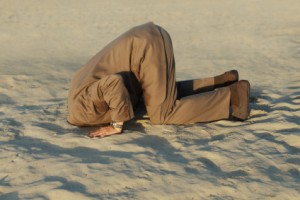 My friend Tim Brownson victoriously and proudly holds credit for being the first person ever to crack the James-gender code (and live to tell about it). Not a guess, not a hunch, not a niggling suspicion.

Which is why I found the conversation he and Dick Carlson shared with me on Twitter funny as hell.

Tim wrote: “I dream of posting on Men with Pens. To me, that’s like Tony Robbins sobbing down the phone begging me to coach him.”

And Dick wrote: “You too? I’m blushing with pride when my little COMMENTS aren’t deleted or edited. A POST OF MY OWN?”

And I grinned and wrote, “Y’all are wieners. Just do it. Face the fear! Do it anyways!”

Within less than six hours, two guest posts landed on my virtual desk. Here’s one of them; please welcome Tim.

There are plenty of urban myths about the self-development industry floating around cyberspace, and maybe you’ve stumbled on one of them.

There’s the “we only use 10% of our brain” belief, which is often propagated to support the Law of Attraction even though this belief was proved untrue over half a century ago.

Then there’s the belief that it takes the same amount of energy to think a positive thought as it does a negative one, which is completely untrue for anyone used to spending the majority of their time thinking negatively.

And let’s not forget the beloved “it takes 30 days to form a habit,” which is so far off the mark that a blind drunkard in an archery competition would have wept with shame if he’d missed so badly.

However, there is one myth rarely mentioned, even though it may be more harmful and hold more people back than all of the above myths combined:

It’s the myth of confidence. Or rather, that people don’t have enough confidence.

I regularly hear clients tell me they need to achieve something once (or even many times) to feel confident about replicating the same behavior successfully. I have others who contact me expressing a desire to set up their own business, if only they had the confidence. And I have plenty who ask if I can help them become a more confident person.

I don’t know you, but I do know certain things about you. One is that you’re already a confident person. I really don’t care what you think, and I don’t care how much you protest to the contrary, because you’re wrong, and I’m right.

That’s a fairly confident – even arrogant! – statement to make, as it’s hardly conventional wisdom. So let me try and retain a shred of credibility while I help you understand that you don’t lack confidence.

You have all the confidence you need.

About six months ago I was having a conversation in my office with a face-to-face client. She insisted that she was being held back in life because she had no confidence whatsoever.

I sat back in my chair and nodded sagely. Then I announced the news:

My client just stared blankly at me for a moment, as though she didn’t quite comprehend what I’d said. Then she reeled off a litany of reasons why I was wrong and why she indeed did have close-to-zero confidence.

After she’d finished, I looked at her quizzically and said, “Are you sure that’s all true?”

“Absolutely,” she responded. “And there’s more than that if you want to hear.”

My client looked confused, but then she gathered her composure and continued. “Of course it’s correct. Do you think I’m making all this up?”

“Possibly I guess,” I shrugged. “Stranger things have happened. Are you are 100% sure?”

She glared at me and bit her lip. I could tell she was losing her patience and was possibly on the verge of leaving.

“So you’re confident you’re correct then?” I ventured.

She nodded her head and was about to answer… and then she laughed.

I won’t go into the rest of the conversation other than to say this: A woman who complained of having zero confidence had just told a life coach she had spent several hundred dollars hiring that he was absolutely, completely, unequivocally wrong.

You don’t do that without being confident. In your position and (more importantly) yourself.

You may think it’s merely semantics, but the situation is far from it – it’s crucially important.

People don’t look for what they think they don’t have.

So if you’re a writer, you may think you need to be published before you can feel confident about your abilities. You’re wrong.

If you own your own business, you may think you need to make a certain amount of money to feel confident you know what you’re doing. You’re wrong.

And if you’re sending a guest post to Men With Pens, you may feel like James has to say yes for you to feel good about what you have written.

As I type this, I have genuinely no idea if James will accept this post. However, I’m confident enough that it offers value and I think it should be.

If I get knocked back though, it’ll have zero effect on my confidence in my ability to write interesting and informative posts. Sure, James may think my post doesn’t work for the Men with Pens audience, but seriously, so what?

That doesn’t tell me anything about “me”. It just tells me James didn’t like some random post I happened to have written.

Now that you know you have all the confidence you’ll ever need, use that knowledge to tap into confidence more easily. How? You go internal versus external.

Here are a few ways you can tap into your inherent confidence:

Oh, and of course you can work on your skills, especially if they’re objective and can be easily measured. Doing so can, without any shadow of a doubt, help you tap into the confidence you have.

And you’ll magically create what already exists within you.

About the Author: Tim Brownson is a Life Coach, NLP Master Practitioner and author from England now living in Orlando, Florida. He’s currently involved in a huge project to give away 1,000,000 copies of the book he co-authored, How To Be Rich and Happy.