How Dirty is Your Mind? 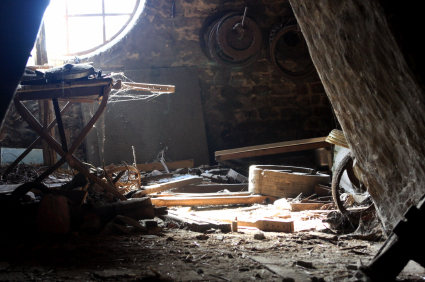 Sherlock Holmes, the great fictional detective created by Sir Arthur Conan Doyle, was purported to have one of the best minds of his generation. In one of the first Holmes stories ever written, Holmes described how he came to have such a clever brain:

I consider that a man’s brain originally is like a little empty attic, and you have to stock it with such furniture as you choose. A fool takes in all the lumber of any sort that he comes across, so that the knowledge which might be useful to him gets crowded out, or is at best jumbled up with a lot of other things, so that he has difficultly laying his hands upon it.

I’m inclined to agree with Sir Doyle that the creative mind is very much like an attic, but there is one thing I disagree with:

Crowding our brain up with too much knowledge isn’t exactly the problem that most of us encounter.

Our problem is often that the corners of the attic are so very neglected that we can’t see them anymore for the dust and grime and cobwebs. That story you thought of in 1999 is still in there, somewhere. Possibly behind that couch in the corner, the one buried under boxes and old clothes. You’re not sure, though. It could be anywhere, really.

When we neglect the attic of our mind, all our creativity goes to waste.

So let’s do a little spring-cleaning, shall we?

Writing: The Great Dust-Mop of the Creative Mind

Every writer, particularly professional fiction writers, will tell you that in order to get to the truly genius stuff, you have to write pages upon pages of complete and utter garbage. You could write a hundred pages of terrible stuff to get to that first good page of your first novel – and that’s just the first page.

You don’t want to know about the second one.

And yet, those who do write professionally for a living often find it much easier to get to the good stuff than you or I do. Stephen King doesn’t write much crap anymore. He’s been doing it for too long.

Now, my theory is that King didn’t get to write pretty darn good stuff every single time he sat down at the table just because he was genetically gifted with brilliance. My theory is that he keeps the attic of his mind clean by regular daily writing.

Think of writing like spring-cleaning your creative mind. When you first start writing creatively, you haven’t been in your attic in a long time. It has all kinds of stuff in there. Everything is dirty. You won’t even know where to begin. No wonder writers are always exhausted by the very idea of writing if we haven’t done any for awhile.

Now think about King’s attic mind. He’s been writing pages a day, every day, for years. He has basically been going up to his attic room with a dust rag and a mop every single day, making sure everything’s in order. It takes him almost no time to get through the dirt because he’s never away long enough for dirt to accumulate.

It might take King a couple paragraphs to get through the extraneous stuff, but then he’s right back in a nice clean attic, picking up pieces here and there that might make a good story.

The problem most of us encounter is that we’ll not write for long periods of time, then come up to that dusty, abused attic room and expect it to be clean within the hour. That’s complete and utter folly. You wouldn’t expect to clean a room with years’ worth of accumulated grime and dirt in an hour, would you? Absolutely not.

To give you an idea, my own apartment was a complete hellhole when I moved in. The two women who lived there before had both had small children under six years old, and they had painted the rooms of the house with daycare colors such as bright pinks and greens and turquoises. They hadn’t properly scrubbed the floors or dusted the corners of the ceilings, ever. The paint was old and neglected and had tons of nail-holes in it. The wood frames of the windows needed to be sanded and repainted.

You better believe it didn’t take me a day to get through that. In fact, it took more than a year to get the whole apartment the way I wanted it: repaired, repainted, and refurnished. And unless I want it to descend into squalor again, I still have to do a full house-cleaning every Sunday. It doesn’t take long – but if I leave it three weeks, it takes a lot longer.

The same applies for your attic-brain. It’s going to take a long time to get that neglected space to the point where you can find everything, where it’s simple to just walk in and start working. You’re going to have days where you do a bit of dusting, which is to say you write some lousy stuff, but you won’t have it happen nearly as often if you walk into that room every single day and make use of it.

I know it’s scary. You may have neglected your attic mind for years. It’s going to take a long time to clean it out. But the only way it happens if you go up there and work on it. So pick up a pen and start cleaning out your attic, an hour a day. One hour every day, and one day you’ll wake up and realize it’s clean. The words flow out so easily. You tap into creative ideas without any effort. Your attic is finally clean.

And then your only task will be to keep it that way, so that you never have to go through that crazy process of starting from scratch again.

Your attic’s not getting any cleaner. Go get started.