Harry grabbed an empty gym bag from the closet and tossed it on the bed. “We’re getting out of here.”

“Yeah?” James knew his partner well enough to know that when Harry made a statement like that, he already had a destination in mind. “Where are we heading?”

“We’re taking the bikes to California.” A couple of sweatshirts and some jeans joined the .44 Mag in the bag. “I know a place called Fawnskin. It’s near Big Bear.” The place was quiet, secluded, and far away from the packs of shooters now crawling the area outside like hungry ants around the Pen Men’s compound. “You’ll like it.”

After last week’s hit cancellation, the boys thought they’d be in for a nice quiet week, but nooooo. James just had to come up with the brilliant idea of a gun giveaway Everyone had grabbed what they could get their hands on and had been taking shots at the boys’ home for days.

“I’m so there,” James packed his own gear and they headed out.

A few hours later, Harry flipped the kickstand down with his heel and cut the engine on the black and red VTX. “Nice place.”

“Mmhm.” James approved. The whole area had that old west feel with its single road, the large red building trimmed in gingerbread, and the saloon-style façade. The empty Hog’s Haven, a defunct biker bar, waited for the boys to revive it.

This week’s hit is Fawnskin Flyer, a community blog started by GG as a joke. 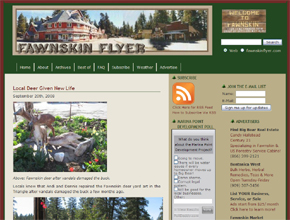 GG’s About page says it all:

The main focus around town seems to be on the local gossip. Soon after moving here, I found myself shaking my head over the daily abundance of tall tales–and let’s not forget about amusing antics of the locals and visitors either.

Wouldn’t you know, I found myself telling everyone that someone should start a gossip rag.

Jamie’s boots hit the dusty ground and he walked around slowly, eyeing the place hungrily. “This looks like a place I can kick back and get use to,” he nodded. “Something’s missing, though.”

“Not really missing,” Harry shoved his keys in his pocket and joined James. “It could just be much more than it is. See those boxed-in borders?” He pointed to the building’s main sign, where red and green trim took over. “If that were full of image, it would look more lush and rich. Homey.”

“Plus, they were going for some kind of bevel effect at the top of that banner sign,” he slapped the dust from his gloves and tucked them in his back pocket. “Makes it look like a chunk of the banner is missing, though.”

Something fun could be done with the town’s sign too, such as making it a 3D part of the header instead of a chopped-off image. (James thinks the sign is a little small and hard to read, too.)

Spruce up the full banner with a few touches of rustic texture, like bits of leather and weathered wood, and make it work nicely for an impact as opposed to having the solid red and green blocks of color.

“There is too something missing,” James pointed accusingly. “See?”

“See what?” Harry squinted against the sun.

“Exactly.” There wasn’t a tagline in site. “If you hadn’t told me what this place was, I wouldn’t be sure if it was a resort, a luxury hotel, a newspaper blog or what.”

And that’s a problem. A small tagline that says something as simple as, “The Fawnskin, CA community blog for all the great gab,” would’ve helped a great deal. To the average person, it looks like this site is one for a hotel, especially with the ads and links on the right.

“At least there’s no mistaking where to go next.” James pulled the building’s main door open and took a peek. The signs were nice and clear, a little plain though with the white on green. Still, navigating this place wouldn’t be a problem. “Hey. They even have the weather. Sunny and clear tomorrow. Want to go hiking?”

The weather page could use some work. It’s a neat idea, but if you have the option of creating a color scheme to match your page, do so. There is no blue anywhere else in the site, and the colors of this page stick out too much after viewing maroon, green and beige.

“Hiking, maybe.” Harry perused the list of activities and things to do in town. “Looks like we can do a lot around here.” Boating, camping, cooking, fishing, folks… the list went on and on and his eyes glazed over before he hit the bottom.

“Wow. No kidding.” Gardening, living, rentals, hotels… “They should chop that list down and group it more effectively. Cooking and Living together, for example, or Fishing and Camping in one.” It would make for a shorter list and more effective categorization.

An alternative to narrowing down the category list would be to put it in a dropdown menu in the main navigation, but that too would require grouping under main umbrella titles.

“Don’t complain. It’s clean, isn’t it?” The sidebar was neat and orderly, with all the subscription info in the right place above the fold and appealingly designed. “Still, that’s a pretty big area. Too much beige space. Narrowing it slightly would help.”

“A little organization, too.” Jamie’s eyes skipped from ads to links to ads to links. “There’s an ad here for a marina but just above, it looks like a marina development project is pissing people off. They should separate that from each other.”

Also take out one of those book widgets from the sidebar. You have two going on right now, which is redundant. We’d opt to keep the Big Bear books widget and remove the Book Club one, unless there’s another purpose to having that club widget up there.

The Blogosphere, Recent Visitor and Meta buttons at the bottom can all go. None of these are very helpful or necessary, and they’re not really of much use to readers. It’s wasted space.

This is one site where we aren’t going to nag about Recent Posts being at the top. The ads and community support are more of the focus and importance, and they should be above the fold. If you get rid of the extra clutter, too, the Recent Posts widget would show up more.

“Ow.” James rubbed his elbow, frowning at the corner of the ad that he’d knocked into. “This makes no sense. Odds and ends,” he pointed to the ads, each one a different size and none lined up very well. “They look crooked, too.”

Harry arched an eyebrow. “Just pay attention where you’re going.” But he agreed. He was a big proponent of banner ads being nicely sized and neatly placed to line up. It just looked better. “Where were you going?”

“I could use a cold one.” He peeked around the room hopefully. “‘Allo?” No one. The bar looked open and ready for patrons, but the server was absent. He walked around some more but couldn’t find a soul.

And on the web, no one can find your site either – at least not from a natural Google search. You have SEO going on, but the keywords are way too general and would get lost in the sea of sites out there. Also, your meta description needs to be a little richer with some benefits to readers tossed in.

One thing we did notice – if someone does find your site, that person will see posts that say, “Only one comment!” That looks lonely and actually dissuades people from commenting.

We’d suggest rephrasing that to, “Already one comment!” to make it more inviting, as if someone beat the reader to the punch and he’d better hurry up to get in on the action.

“I like the trees.” Lacking beer, James settled for relaxing while looking at a nice view of some pines. “Kinda cute.”

“Yeah. I like them too.” Harry thought about log cabins and where he’d live if he could have one. Pine trees, woods…They were both waxing nostalgic, and James mentioned the leaves back home turning red and how he liked the smell of a warm fall day.

“They have no one to serve beer,” he shook his head sadly. Then he pulled out his gun, turned and shot once, exploding the bar’s mirror into a million shards of glass.