“What is this place?” Harry stepped out of the car feeling disoriented. This was worse than the first time he’d set foot on the Las Vegas strip.

James pointed to the mish-mash of images that hung over the place. “What’s that say? Is this for a church or a beach?” He squinted, trying to make out the location’s name. “This place makes last week’s hit look like a dream.”

“Hold on a second.” Harry tucked his revolver into the shoulder holster and took out the GPS. “Nope, we’re in the right place.”

James relaxed and pointed to the footsteps wandering off. “Looks like no one’s home.” Good. They could poke around in peace. If peace was what this place was all about.

Today’s hit is for Spiritual Tramp, the blog of Scott Roche. Here’s what the site looked when we drove by: 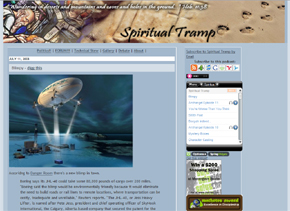 James stepped up to the piece of stained glass and dusted it off, peering in. The images represented spirituality, but there was so much going on that it was hard to know what to look at first.

“That’s one busy banner going on,” he winced. “It’s overpowering. I thought spirituality was about peace.”

With the busy images and the hard-to-read font, it’s difficult to focus on anything in the banner. The sand and footsteps eventually win over (according to James’ eyes) for image attraction, simply because the image is less cluttered.

A suggestion would be to use the sand for the banner design as a whole. Remove the busy image on the left-hand side and replace it with a soft beige or white with gradient shading. Alternatively, carry the unmarked sand over and use that as a background.

With that “white” space available, you could easily move your title text and tagline to appear at the top or bottom of the left-hand side.

James squinted at the vague characters. “I think it’s a tagline. I can’t really see what it says.”

It’s very difficult to see the blurry title and quotation, as both end up getting lost in the background image. Both should be the same color for consistency.

Also, script fonts aren’t the best choice for titles and banners, unless they’re very sharply defined. Script fonts have their place, but not in a busy banner like this one.

With more “white” space in the banner, the busy pictures removed and a clear, well-defined font on display, the banner would be clean and peaceful with the spiritual sense clearly conveyed.

“Gimme that GPS,” James held out his hand and wiggled his fingers. “I need some help figuring out where to go next.”

The navigation titles aren’t clear. How do politics relate to the site? Technical Stew? Debate… Debate what? Try using tags that are clearer. “Spirituality and Politics.” “Technical Talk.” “Share your Views.” “Our Forum.” “About Us.”

Also, consider increasing the size of those tags to make them more visible. Get rid of those exclamation points, too. They change the whole tone from peaceful to excited, happy puppy, a sense that really doesn’t fit the theme of the site.

The two men walked around a bit, meeting dead ends and consulting the GPS from time to time. One large problem with location was that they still couldn’t figure out what the place was all about. Was it a religious site? Was it for fun? Was it a satirical site? Was it supposed to be inspirational?

They tried to look at the signs on the wall and the writing that someone had left. The content and posts weren’t any help. They were untraditional for the expectation of a spiritual site.

“Oh, wait, I think I figured it out,” James peered at one of the posts. “I think it’s about this guy’s journey and discussion regarding spirituality and how it fits in his life. Man. Good thing we were here for a while. Anyone landing here by chance wouldn’t have a clue.”

Clear up what the site is about. Make it clear from the start, from the very first impression. Add a text widget at the top of the sidebar to tell people what they should expect here. Exchange your tagline for one that clearly says what people will find on this blog.

“Who was the decorator here, do you know?” Harry picked at the blue paint and glanced at the brown slapped right next to it. The theme colors weren’t ones that blended well. Soft blue and beige were good colors, but whoever had done the painting on the walls had gone overboard on the contrast.

It would be best to use a white background and use the blue as an accent color or carry the beige sand from the banner throughout your site, using white and soft blue as accent colors. Create a blended theme that is easy on the eye. As it is, the blue background and the beige banner come off with too much contrast and the colors need to be evened out.

The font color needs to be changed as well. Yes, posts are readable, but they could be easier to read. Too many people try to get artsy with the color of content text, but that’s a common mistake. When a color is other than black (a dark shade of grey or brownish-black), the eye wants to see black. People end up getting distracted subconsciously trying to figure out what color they’re looking at.

Go with black for your content font for easier screen reading. Alternatively, soften the blue and darken the background color. If there were a white background, it would be even better.

“Ow.” Jamie rubbed his shoulder, the one that had just smacked into a door frame built too small. “Never mind who the decorator was… who built this place without a tape measure?”

The blog template doesn’t fit properly on the page. There’s a huge block of space not being used on the right-hand size and everything is left justified, which makes the site look crooked. The dividers give the theme a blocky look, enhanced by the blue-on-blue coloring going on. Eliminating the dividers would help the layout.

“Not sure who built this.” Harry poked at the sidebar. There was all sorts of stuff in it, and the area looked haphazardly thrown together. Nothing fit well and there was little consistency. “This could use some cleanup.”

The RSS isn’t highly visible and there are too many buttons. It’s not necessary to offer that many, as a regular Feedburner RSS gives people the choice of how they want to subscribe. Put up a bigger, clearer RSS button.

The podcasts are the best feature with good placement. The widget is clear to use and looks nice. Have a Recent Posts below the podcast section to help people navigate the site. Place links to content where people can see them.

The contest ad and the Mathetes logo aren’t centered, and the Mathletes actually goes outside the sidebar layout lines. Reduce the size on that and center both images.

The little Blog Catalog icon could be dropped – it’s not adding anything of value. The plastic bag counter is thoughtful and thought provoking, so keep that. You could even add a link to an article on alternatives or content on how to help control plastic in the environment.

“Whoa… Did you see this?” Harry arched an eyebrow at the categories. “Option paralysis. Damned tiny option paralysis, too,” he squinted, trying to read the font.

There are way too many choices going on in the category section. Reduce that list to something manageable and increase the font size for readability.

Having the Recent Comments is fine, but again, the font is way too tiny.

Group the Archives with Categories or have Archives installed in the main navigation so that people can easily get to your content. Having the Archives down low offers little value to readers unless they go scrolling to look for it.

Technorati, not needed. The rank is too low and there isn’t much to offer people regardless, even if they do click through. Ditch.

Twitter box… gadget. Possible keep, possible ditch. That’s a personal call. Since the blog isn’t for business, there’s no harm in it. The ‘Follow Me’ link is way too tiny, though, and the color choices is bad for visibility. Make that black so people can see it.

The photo section for Flickr just looks long and the pictures are small. What about a ‘Gallery’ page in the main navigation instead?

“Wow, this guy really likes his links, huh?” James peered at the long list. “Lotsa love going around… Did you bother to read all these?” He glanced over at Harry.

“Nope. Information overload,” Harry shook his head, fishing bullets from his pocket and loading them into the gun.

Cut those links down to size and be merciless. The list looks scattered and disorganized. Have maybe three to five per group. Less links actually works in the blog’s favor, because it shows discernment about who you link too. Clean up the anchor text of the links as well and remove the slashes.

They moved back outside, and Harry turned to stare at the building. “What do you say… Should we put this place out of its misery?”

James grinned. “Mmhm” He casually held up his Glock and pointed it at the place. “Ready?”

“Ready,” Harry took position. Then he stopped. “Hold on.” He fished out a scrap of paper and scribbled something on it, then ran over to leave it on the steps, placing a brick over it to keep it from blowing away.

“Little present for Tramp,” he came back and took position. And as the sun set behind them, the two men pumped the empty building full of holes until they had no bullets left.

Only the scrap of paper remained to greet the owner, fluttering in the gentle breeze. Sorry, Trampie. Did you think you’d get off easy? H/J

Want your blog shot down? Sign up in the comment section for your free drive-by, and we’ll schedule you in.

Or hit us up for a private drive-by via email. It’s only $30, and you’ll get your shoot-out within a week.

Come on. You know you wanna.