Stunning. No other words could describe the scenery. After the heavy darkness of last week’s hit, stepping into this job’s location nearly knocked Harry off his feet.

He stood in the doorway, the sun streaming down through wide-open skylights. The black bag with the C4 and charges dropped from his hand, thudding at his feet.

How could he destroy this?

Both Pen Men had figured it was time to bring in heavy-duty explosives. They were looking forward to complete demolition, especially after the last few hit jobs they’d had.

They had come prepared, with explosives in hand and set for an implosion worthy of Las Vegas crowds – and Harry just couldn’t do it.

Today’s hit is for McAWilliams Photoblog. Here’s what the site looked like on the day we drove by: 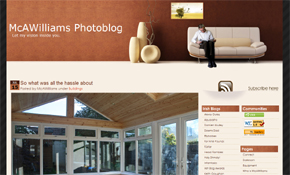 “My gods, James, this place is nearly pristine.” Harry ran his hands over the smooth, creamy browns, the natural textures of suede, wood, and buttery-soft leather.

“Very classy.” James nodded in approval. This place matched his tastes for finery.

This is one of the best design jobs we’ve seen in a long time. The banner is absolutely beautiful, and the theme matches perfectly. If you chose this on your own, well done. And if you had it designed, kudos to whoever took the task to hand.

The warm browns and gradient shading are very appealing, and the additional cream of the furniture blends right in. The font for the banner is a perfect choice, and nothing is cluttered at all. It’s clean, it’s sleek, it’s suave… Oh yes.

One small suggestion would be to clean up the tagline slightly. It sounds a touch awkward, and we suggest adding a verb to smooth it out and clarify it a bit. “Let my vision reach inside you,” or, “Let my vision touch you,” would be better. Keep in mind that’s subjective preference.

“Classy indeed,” James narrowed his amber eyes at the décor around the room. “But far from perfect. Tell me what’s missing.”

“Damn. You’re right.” Harry had been so enthralled by the beauty of the place that he’d totally overlooked the fact it lacked something.

Now, a navigation menu bar isn’t necessary, as your Pages are on display at the right. It’s easy for the theme to pull off a lack of navigation, though. The very design and use of color makes one want to linger, and we’re sure people would find their way. Still…

The Page titles aren’t clearly labeled and it’s very easy to be confused about what we’ll see if we click through. What is Connect about? And what will we see if we click Darkroom? Equipment is clear, but adding a pronoun would help the links look less cold. Add a Contact page, too.

The theme wasn’t designed for a navigation bar or main menu to stretch below the banner, and it would take some fancy coding to make that happen. We’d suggest a drop-down menu to maintain that clean look. It isn’t impossible to add navigation, but it is a job for a specialist.

By now, people with monitors that are more average sized, like 17″ or 19″, may be wondering what Pages we’re looking at. They can’t see the far right sidebar unless they scroll right.

(In fact, James worked on the drive-by to the end without even realizing there was another sidebar there. Harry was smarter and switched computers to view the whole page.)

Reducing the width to 960 would let more people view your full site without having to fiddle with resizing.

“Alright, I have to focus,” Harry told James, ripping himself away from the beautiful design. He had to look deeper than the surface. They had a job to do.

James was still scrutinizing, rubbing his chin thoughtfully. Although the design had the sleek sophistication that suited Jamie’s style, a few things just didn’t sit right. “Yeah, focus.” He reached down and snagged the bag of explosives. “I’ll start setting these out.”

“Are you kidding me?” A panicked look crossed Harry’s face, and he snatched the bag away from James. “You are not putting anything anywhere.” He clutched the bag to his chest.

“No.” Harry’s expression dared James to test his resolve.

James sighed and raked a hand through his hair, the blond strands tumbling back into his face. “Alright, fine. Do your thing. What’s this,” he nudged the brown square with his toe.

The RSS button is clear and visible, but it could be larger and more apparent. The color matches the theme perfectly – almost too perfectly. You have a neat side effect going on with it, so don’t change that, but do try to increase the size and help it stand out a bit more.

Harry peered at the list that hung from the wall. “What is this? This is a photography blog, isn’t it?” He checked with James, who was scanning the list of Irish blogs.

“Doesn’t fit,” James shook his head, then he tapped the paper. “Look here. Photography links are way down on the list. They should be up here,” he pointed to the top. “And man… That’s a hell of a list.”

The photography links should show up first at the top of the site, and the Irish links should be at the bottom. Otherwise, visitors become confused and wonder about the relation between the Irish and photos.

Trim down the number of links you have on your blog, too. That’s quite a long list. If you do want to display all the links, try to create groups of three, five or seven that are relevant, and title them well.

Do the same with Categories as well. There are too many there, and a drop-down menu would resolve the issue. At the very least, you have enough space and a clear, legible font going on to make it easier to read the long list.

Harry began taking things down off the wall and rearranging them. “I’d put this here,” he switched the Photo Blogs with the Irish Blogs.

“Then I’d put this here,” he exchanged the Community widget with the Pages, put Recent Posts and Recent Comments closer to the top with Categories underneath and Archives below – and took a step back.

“Not bad. This guy’s been here a long time.” 2005, the scratch on the wall revealed. But that left a lot of archives to dig through, and the sheaf of papers took up space. Had the archives been simply boxed by year, they would’ve been easier to work with.

“I don’t know, James. It’d be a shame to blow this one up.” Harry crouched on the floor, observing the room from another angle, and he squinted up at his partner. “Save it for the next hit?”

James scrutinized the room carefully, thinking over the risks of letting someone get away. “They’re going to think we’re going soft,” he commented absently.

“They’re going to think we know a good thing when we see it,” Harry responded. But he knew he’d made his point and James would cave.

But he never caved easily…

James grabbed the edge of the desk and heaved. It tipped over and landed with a resounding crash. Photographs flew up and scattered across the floor. Some film rolled out and memory cards clattered onto the ceramic tile.

“Boom,” he said softly and turned to leave the room.

Want your blog shot down? Sign up in the comment section for your free drive-by, and we’ll schedule you in.

Or hit us up for a private drive-by via email. It’s only $30, and you’ll get your shoot-out within a week.

Come on. You know you wanna.