The Elevator Pitch: A Guide for an Internet without Elevators 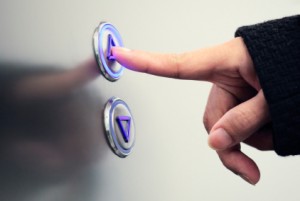 This pitch is supposed to be less than ten seconds, but it should be so compelling that your elevator companion immediately goes wide-eyed and captivated, clasps your hand and declares that they’ve never needed anything so much as they need you and your services, right now.

In an online world, pretty much no one rides the elevator with a prospective client. Steve Jobs created a lot of wondrous things before he passed, but a virtual elevator ride was not among them.

The elevator pitch can still get you clients, convert skeptics, and guide the entire course of your business marketing strategy, though.

With a few upgrades, that is.

When the elevator pitch was first conceived, it was a remarkable idea. Before, pitches were usually conducted in fifteen-minute-to-an-hour-long meetings, followed by a Q-and-A with plenty of time to cover anything you’d left out.

You could bring visuals and graphics. You could give analogies and anecdotes. You could display all your ideas for how to fix this particular client’s problems.

The idea of a pitch you could deliver in the mere ten seconds it takes to ride an elevator to the ground floor?

It still is. The only difference is that the amount of time you have to convey what your business is and offers has narrowed.

Instead of 10 seconds, it’s more like 3 seconds. That’s about how long we spend on a website before deciding whether or not it’s worth our time.

The difference between 3 and 10 seconds doesn’t seem like much. They’re both very short periods of time.

But there are a few critical differences between the elevator pitch and the online pitch – and they all have to do with what happens in three seconds vs. ten.

Ten Seconds is a Captive Audience

In three seconds, there’s no time for a recovery. You either land that person’s interest or you don’t.

You may have time to deliver a second pitch – but only if the first one hits a home run.

If the first pitch piques their interest and the second really hits home, you’ve got them. But if the first fails, they’ll never know about the second pitch.

They won’t be there anymore to hear it.

The lesson? In the online world, the elevator pitch loses its set-up. You have about two sentences to get your audience’s attention.

The Internet Is a Much Bigger Elevator

While you had more time to make an elevator pitch work, you were also limited by the number of people who were actually in the elevator with you.

An elevator pitch was designed to catch the interest of one person at a time. At a maximum, the pitch might catch three people – assuming they were all from the same company and had the same needs.

The elevator pitch was a one-at-a-time deal. The odds of there being two people in the elevator who would be swayed by the exact same pitch were next to nil.

The Internet is a different story. It’s possible to put your website in front of thousands of people on any given day.

You have essentially expanded your elevator to include a thousand people instead of three.

Your odds that several of those people will respond to the same pitch?

They just got a heck of a lot better.

The lesson: Just because you have less time to make an impression doesn’t mean you need to make your pitch generic. Your three-second pitch can be just as precise – or even more so – than your elevator pitch, because the size of the audience makes it more likely your precise pitch will find interested ears.

The elevator pitch was distinct from a job description. That was part of the whole revelation, in fact.

Instead of simply saying, “I’m a copywriter,” the elevator pitch taught professionals to say things like, “I make businesses more appealing to their clients.”

The elevator pitch taught thousands of professionals that their job wasn’t important.

What was important was what they could accomplish for the client.

“I can get you more clients,” is an accomplishment. How you got them more clients – with great web design, fantastic copy, killer marketing strategies – was a detail.

It often wasn’t even a part of the pitch.

Focusing on the client’s needs instead of your own skill set? It still works.

Here’s what else still works: Asking the client a question when you already know the answer.

One of the classic elevator-pitch strategies was asking a question that 99% of people would answer yes.

The person in the elevator says, “Why, yes, I do have that problem sometimes.” Which gives the guy pitching a great opportunity to say the most important sentence in the history of marketing:

I can solve your problem.

It’s the oldest strategy in the book. And it still works – in just three seconds.

What’s Next for the Elevator Pitch

Once you understand your elevator pitch, it becomes the basis for every piece of copy you’ll create. It will help you draft your website copy, your marketing emails, even your Twitter bio.

You’ll start seeing the world in the space of three seconds and answering the critical question:

What problem of mine can you fix?

Answer that question, and you have a pitch that works absolutely everywhere.

Taylor hails from Boulder, CO, and she blogs for people who are too good to fail over at... well, Too Good to Fail. Go check out her inspiring posts and beautiful encouragement now.