Are You Hoarding Ideas? 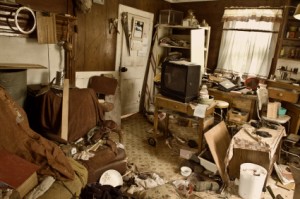 I bet that over the past months or even years, you’ve collected a ton of half-formed ideas. Heaps of them. Because they’re Good Ones. You’ve jotted those Good Ideas down on some sort of document somewhere so that you won’t forget them, and you keep them handy just in case.

Just in case. Because one day you might need them.

People with hoarding behaviour collect all sorts of items. Clothing. Furniture. Knick knacks. Stuff they have no real need for. Stuff they don’t use… and never will.

But they keep all that stuff anyways. They stash, they store, and they fill rooms (even entire houses!) with all sorts of possessions. They sometimes even hoard so much they nearly crowd themselves out of their own house and onto the street.

Hoarders have a problem: They can’t discard what they don’t need or can’t use. They let clutter take over their life.

And they can’t stop.

You hoard. I know you do. Maybe not clothing or gadgets, but you hoard ideas. Freelancers are FULL of good ideas, and entrepreneurs are even worse. So I know you have all these little bits of ideas kicking around. You stash, you store, you fill up your hard drive with half-written files and snippets full of good intentions.

Just in case. Because one day you might need them. You’re planning to do something with them.

The problem is that one day never comes. You collect months and years worth of ideas and never action any of them. If you do, you give the idea a half-hearted start, eventually letting yourself get sidetracked onto something else, and the idea just sits there, taking up space.

You aren’t going to use that idea, the same way hoarders won’t ever use 90% of all that clutter they’re collecting.

Here’s the big question: If we’re not going to use our ideas (or our stuff), why do we cling to them and let them clutter up our minds?

Well, that’s easy. Some people hoard because they think the items are valuable – when they’re really not. Some think they might one day need those items – and they never do. Some hang on out of a sense of frugality, to save money… which costs them on several levels. And some have emotional attachments. They just can’t bring themselves to let go.

Think of the half-written blog posts you won’t finish. The business venture ideas you won’t start. The products you won’t create. The courses you won’t put together. Think about the files on your computer, the notes you’ve written to yourself, the cheat sheet full of partially formed stuff you’ll do.

Imagine what you could do if you cleared out that clutter. If you just wiped everything clean and started fresh. Imagine grabbing onto one idea that you know has potential… and sticking to it. Actioning the steps. Seeing it to the end.

Not one day. Today. Now.

Fair enough – it’s not that easy to clear away piles of Really Great Ideas. You might throw out a good one! And never find it again! It’ll be lost forever, the dream of riches and millions…

See how insidious hoarding behaviour can be? If you don’t stop clinging and start something, you’ll never have anything but a pile of ideas that go nowhere.

So here are a few steps to help you tackle the junk, let go of the clutter and start achieving great goals:

Don’t decide to clear out everything. Pick something small that you can clean up now so that you can finish quickly and actually see your progress.

Choose a single folder on your computer and clean up the files. Grab one idea sheet and decide to eliminate 10. Work for only half an hour, then stop. Tomorrow, pick another folder, clear out another 10 ideas or work another half hour.

Otherwise, you’re probably facing a huge task. Minimalizing your clutter can be done in an exhausting weekend marathon, absolutely – but it’s far less stressful and manageable when done in small sprints.

(Just ask the intervention-assaulted hoarders on TV how they feel after two intense days of watching their homes being ripped apart and emptied by those helpful clutter killers.)

Most of us aren’t truly honest with ourselves. It’s damned hard to admit we’re never going to run that dream marathon or set aside money for that new car. It’s much, much easier to lie to ourselves and say of course we are! We’re just not ready. We don’t have the time. Besides, it’s a Good Idea – we should hang onto it for now.

No. Come on. Be realistic. Ask yourself questions, like, “When will I actually ever move forward on this idea? How long do I need to hang onto it before it’s okay to let it go?”

The answer – if you’re really being honest with yourself – is that you’re probably never going to action the idea, and you don’t need to hang onto it for five years before figuring that out.

So why cling to it?

But then I asked myself when I’d really ever do anything with it… and how many years did I really need to fork out money just to hang onto the name?

And that’s really all there is to it. Start small, ditch, sort and organize, and be honest with yourself. By the time you’re done chucking those old files and lists of ideas, you’ll realize you’re left with just a few.

A few good ideas. REALLY good ideas. Ideas that you’re actually going to do something about, because as you revisit them, you realize they’re still exciting to you. Worth your time. Worth your energy.

In fact… Excuse me, but I think I have to go action one of those really good ideas. How about you?

Want to learn more about mind-cluttering roadblocks holding you back from freelancer freedom? Then get your free copy of Peter Shallard’s awesome guide, Seek and Destroy.

Packed with damned wise advice for freelancers and entrepreneurs, Seek and Destroy lays out ten common business obstacles so you can discover which you suffer from and get fast tips to clear them out of your life forever.