How to Unblock Your Writing and Create Effortless Words 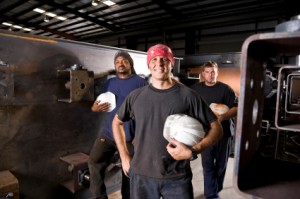 Did you know writers have a mental factory hard at work in their heads? That may be surprising, but it’s true: You have a full staff up there in the office of your mind.

Now, you may be the CEO calling the shots, but your mental employees are the ones who action your decisions and produce the blog posts, articles, web copy and novels you create. When you take awareness of your team, you have one awesome production line at your disposal.

Close the office door and ignore your team’s existence, and you have chaos.

But I’m getting ahead of myself. First, let me introduce to your mental writing team: the Visionary, the Draft Worker and the Editor.

The Visionary heads the team. He’s the one who thinks up the great ideas, and he’s the creative crafter producing the mental raw material for the team to work with. Want to know how to recognize your Visionary? He’s the one shouting, “That would make an awesome post!”

Now the Visionary doesn’t write. That’s not his job. The Visionary’s only role is to come up with ideas and send them to the next guy in line: the Draft Worker.

The Draft Worker gets handed the ideas, and his job is to take the idea in front of him and write. He starts scribbling away and creates a rough written draft. You can recognize what the Draft Worker does when you see the 500 words you just wrote on your screen.

But the Draft Worker doesn’t polish the writing. That’s not his job. The Draft Worker’s only role is to flesh out ideas into written words. Then he sends the draft to the next employee: the Editor.

The Editor doesn’t create ideas and he doesn’t write. That’s all beneath him. His job is to take the rough draft and apply his hawk-eye skills. He looks for typos and cleans up phrasing. He smoothes the rough edges, polishes the structure, tightens things up and tweaks until the piece is presentable.

And your Visionary says, “That’s it! By jove, you’ve got it. That’s exactly what I wanted to say!” You hit publish, and the work’s all done.

Now your hard-working writing team can do magic. They perform their duties on demand and as a result, you can churn out good work without stumbling blocks.

But like any team, sometimes there are power struggles. Squabbles. Infighting. Backstabbing between co-workers. And sometimes it gets so bad that your team’s work can grind to a halt. They completely shut down your mental word-crafting factory.

And when that happens, you can’t write.

Your Editor puts on airs and starts to think his role is most important. After all, editing is what makes your writing awesome! And he thinks the Draft Worker should pay more attention to editing. So he starts looking over the Draft Worker’s shoulder as he writes and criticizes everything. It’s not good enough!

Your Draft Worker gets unhappy, because now he’s being watched like a hawk, criticized every minute, and keeps getting interrupted. He can’t do a good job, because he’s getting told it’s not good enough, that he should start over every sentence or work harder to find the right words.

Your Visionary? He’s on his creative throne trying to come up with ideas, but now the other two guys are making a lot of noise. The fighting’s distracting. The Visionary can’t think of new ideas, and he even starts forgetting good ones he had in mind. So he decides to go see what all the ruckus is about.

What does that give you?

It might take you hours – days! – to write a mediocre post. Creativity’s low, nothing seems good enough and you can’t finish anything to satisfaction.

You need to resolve your internal staff squabbles.

It’s time to call a mental time out and split up the fighting. You’re the CEO of that mental writing team, which means you get to call the shots. You get to send everyone back to their desk and back to their job so they can all get back to work.

You’re in control of your mind. And that means you control your results.

Your Visionary needs room to come up with great ideas. Start there. Get away from the computer and give yourself mental some mental space. That way, the Draft Worker can’t elbow in to grab a half-finished idea and the Editor can’t criticize a crappy rough draft.

Go for a walk. Hang out in a café. Take a day off. Read a book. Expose yourself to the outside world so you can get the mental stimulation you need to come up with ideas. Bring a pen and paper. Jot down thoughts as they come to you. Write down a working title and three points that you want to write about.

Then close the pad, thank the Visionary for doing his job and do no more writing that day.

The next morning, it’s the Draft Worker’s turn. It’s time to take the idea and write a rough draft. You have the idea and a brief, three-point outline to work with – now you need to flesh it out.

Give the Draft Worker what he needs to settle into work. Start by preparing yourself mentally with a good routine that puts you in the mood to write. Don’t write cold – warm up by writing something completely irrelevant for 15 to 30 minutes. Then let your Draft Worker do his job.

What’s his job? To write an absolutely unpolished mediocre rough draft from the Visionary’s idea. That’s all. Just get the words out. Nothing spectacular, nothing perfect, nothing awesome. A rough draft isn’t supposed to be good – remember, that’s not the Draft Worker’s job. Just write a not-too-bad piece for the Editor.

And when you’re done, stop writing, close your document, thank the Draft Worker, and do no more writing that day.

The next morning, your Editor’s up – and by now, he’s probably raring to go. Let him loose on that rough draft. He’ll love sprucing up the Draft Worker’s writing. Don’t let your Editor write – that’s not his job. Just polish the prose and correct awkward phrasing. Check for typos. Smooth paragraph transitions. Make the rough draft good.

Then wrap it up in a pretty bow and be done with it. Your editor can’t get incessant, after all. His shift’s over. Thank him for his good work, and hit publish.

Teach your mental writing team that they need to respect each other’s roles. Each has a single task to do, and each contributes to the creation of great writing. They all bring equal value to the finished piece and rely on each other to achieve a good piece of work.

No one is more important than the other.

Once you’ve developed a respectful mental working environment for your Visionary, your Draft Worker and your Editor, you’ll soon be able to benefit from their magic. In fact, you might find that separating your writing process into three mental roles (and enforcing a round-robin of taking turns!), your writing becomes better and faster – because your mental trio isn’t wasting time trying to control each other.

They’ll be focused on their job, and when their shift is over, they’ll be cheering, pushing and encouraging each other along. Your writing will swoosh from rough idea to polished piece in no time at all.

Need to bully your writing team into submission? Check out:

The choice is yours. Get a shrink or get a book… so you can get back to writing freely.