How to Kill the Inner Critic Inside Your Mind 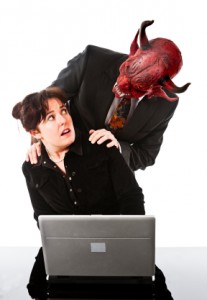 Inner critics.  We all have one – especially if we’re writers. It’s that insidious little voice in our minds whispering words of doubt into our mental ear.

Inner critics are evil creatures set to hold you firmly where you are right now: going nowhere and full of fear of what might be out there. They do their job very, very well.

Your inner critic is a master manipulator.

I think of my inner critic as a tall, handsome, cunning man. I’ve never seen my inner critic, of course, and worse, I can’t recognize him easily. He disguises himself by using different voices to seed doubt in my mind.  I’ve heard him use my grandmother’s voice, my parents’ voices, the voices of my ex-lovers and even those of long-ago friends.

I guarantee your inner critic has whispered similar evilness to you at some point in your life – this happens to everyone.

And if you’re a writer, or if you write for your business, I’m convinced you’ve felt the work of your inner critic before. Self-doubt and self-criticism are rife in the writing world – we’ve even coined the term “writer’s block” for when we let our inner critic win and rob us completely of our ability to write.

But I’m beginning to – and that’s why I want to tell you this story.

The other day, I was thinking about a friend who hadn’t called me in a while, and my inner critic stepped in smoothly to take full control of my thoughts, feelings and some of my actions.

The whispers began. “You must have done something wrong. Why else wouldn’t she call?”

That whisper took firm hold and played itself over and over in my head all morning. I tried desperately to think of what I’d done wrong. I racked my brains. Losing this person’s friendship scared me to death… and my inner critic knew it.

By the time I spoke to James that day, I was overwhelmed and ready to burst into tears. With a single sentence, my inner critic had shredded every ounce of my confidence and convinced me I was about to lose a cherished friendship – I was a wreck.

That’s when James reminded me that I have full control of my mind – and that while I might have an inner critic working dark magic, I also had a knight in shining armor ready to defend me: the Voice of Reason.

The Voice of Reason would say something like, “She probably didn’t call because she’s been so busy. Or her cell phone battery died. Maybe she dropped it somewhere and it broke!” Sensible answers that were completely plausible and more than likely.

Answers like that warred against the inner critic’s whispers.

That’s when the idea hit me: If I could imagine what my inner critic looked like, why not imagine myself a voice of reason as well? When I began thinking of what this new voice would look like, there she was! A female warrior with streaming red hair in fighting stance, fists ready to fly in my defense.

Something marvelous happened then. I realized my inner critic wasn’t really as savvy or as smart as he’d like me to think – I’d let my mind airbrush him into more than he should be, and I’d given this imaginary critic way too much control over me.

Now I could imagine him looking a little afraid as I created this new champion to have at my side. In fact, I let the war begin – my new voice of reason battles every whisper my inner critic utters in a war to put him in his place.

The battles aren’t always easy. Sometimes it’s full out war. But the inner critic is already losing ground, and I’m sure my voice of reason is going to win.

I’m sure I’ll win – and I’ll never let my inner critic take control of me again.

I’ve shared my story with you – will you share yours with me? Tell me about a time your inner critic took control of your feelings. How did you take it back?

Kari is a full-time content manager, editor and in-house blogger at Men With Pens. In her spare time, she writes fiction and is working on her first novel.