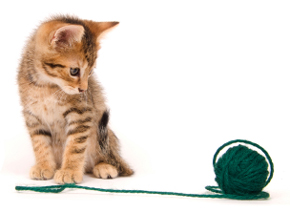 Last week I ran into an interesting phenomenon. For the first time, I had several bloggers tell me they never used the comments on their blogs – and wouldn’t even consider the insanity!

I couldn’t believe that a blogger wouldn’t use the comments section. I was a man on a mission – I had to find out why. I had to spread the Commenting Gospel as laid down by King James himself (that would be James Chartrand, the Comment King).

I had to go see this phenomenon for myself. What I found was a whole other world. This world involved needles, cats, and brightly colored balls of yarn. A tornado dumped my blogging perspective right in the middle of… a knitting blog.

Dorothy was right – I wasn’t in anymore.

Let me first say that the knitting community gave me a warm welcome. These people were fun to talk to and extremely open-minded to trying something new. Comment on their blog? Now that’s an amazing idea!

And one met with skepticism. Most of the bloggers admitted they never answer comments on their own blogs. A majority contacted each individual through email.

The biggest reason the knitting blog community didn’t use the comment section was that they seemed to think it would take up too much time. I suppose if you’re not used to it, reading and responding to comments could take up a lot of time, especially if you try to comment on every single blog you read.

Well, James and I joined a conversation about commenting over at the knitters’ blogs. Each group explained our point of view and perspective to walk a few steps in each other’s shoes.

Then, for one week, Deb of ChappysMom.com and Chris of StumblingOverChaos.com tried commenting on their blog along with the rest of their readers, and I tried my hand at answering a few emails on the side.

Commenting for the sake of commenting isn’t what it’s all about. Commenting is about fostering conversation and gaining inspiration, insight, and a new perspective. It’s true; there are many commentators who leave the useless one-liner – we all know how much of a waste of time that is. A good comment is definitely an art.

The ensuing commentfest was insane – but in a good way. I don’t think the experiment made any converts, but we all sure had fun. I have to hand it to the knitting bloggers – for people who never used the comment section before, they sure kept the conversation going strong! Honestly, I couldn’t keep up after a while. The knitters wore me (and James) out.

But hey, at least I’m man enough to know when to admit defeat.