Writing Tips from Blackbeard the Pirate 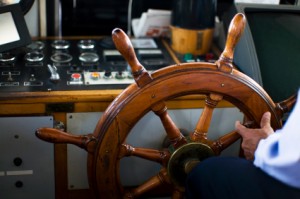 Edward Teach, more commonly known as Blackbeard, is perhaps the most notorious pirate that ever lived. As pirates are a generally notorious bunch, that’s no mean feat.

Blackheard captured a French merchant vessel, renamed her Queen Anne’s Revenge, and outfitted her with more than 40 guns. He set about terrorising merchant ships around the Caribbean and South Carolina. He plaited his long black beard and tied it with ribbons, then went into battle with a three brace of pistols hanging from a sling over his shoulders and lighted matches under his hat.

Charles Johnson, author of the 1724 book, A General History of the Robberies and Murders of the Most Notorious Pirates, described Teach as “such a figure that imagination cannot form an idea of a fury from hell to look more frightful.” He’s not the sort of character I’d usually hang around with.

He’s also an unlikely candidate for a writer’s hero.

Blackbeard can teach us a thing (or three) about running a successful writing business. After all, Blackbeard was an entrepreneur of sorts. Within a year of taking his first ship in 1717, he’d swelled his ranks to well over 300 pirates and amassed a whole fleet. His exploits have inspired more than 300 years of literature, films and comics.

If you’re trying to forge a niche for yourself as a writer, then you could definitely learn a few lessons from this scurvy pirate.

Blackbeard didn’t just want to be a pirate – he wanted to be THE pirate. He set the benchmark for piracy in his time, conducting daring campaigns, blockading the Charleston harbour, capturing ship after ship and striking fear in the hearts of sailors up and down the coast.

He figured he’d found what he was good at, so he was going to be the best damn pirate he could be. The man put lit matches in his hair. That’s dedication to the piratical craft.

As a writer, don’t settle for being merely good. Strive to be notorious in your niche. Give every writing client your best effort – meet that keyboard in battle with your pistols ready and your matches lit. Say what you mean, and mean what you say.

Don’t Take On More Than You Can Handle

Sources report that Blackbeard deliberately ran his flagship, the Queen Anne’s Revenge, aground at Beautfort Inlet because his crew was so large it was becoming unmanageable. He stole off with a handpicked crew and most of the booty, leaving the rest of the pirates to make their own way.

Most of them ended up in jail or on the end of a rope.

If you’re feeling overwhelmed, it’s time to take stock of your writing business and send all the unnecessary stuff down to Davey Jones’ locker.

It’s the piratical version of the old 80/20 rule. Blackbeard figured out 80% of his pirating was done by 20% of his crew, so he got rid of the surplus.

Maybe 80% of your writing income comes from only 20% of your clients.

Wouldn’t it be better to concentrate on your most lucrative contracts and make the others ‘walk the plank’? This frees up your time and energy to focus on growing your business and finding writing assignments that better match your skills.

I even wrote a poem to explain the concept further:

If 20% of your clients bring 80% of your headaches,
It’s time to throw those time-wasters to the snakes.
And if 80% of your rum is drunk by 20% of your crew,
Make them walk the plank. Now there’s more rum for you!

You Can’t Take Your Gold with You

Contrary to many pirate legends, Blackbeard didn’t horde money in treasure chests or bury it on a desert island. In fact, he took very little treasure at all.

According to legend, he stole mostly high-value trade goods, which he took to ports and sold to pay his men. He spent his money as he earned it – on fine clothes, good food, and busty wenches.

The archaeologists working on the Queen Anne’s Revenge have recovered an incredible array of luxury personal goods – much more than one would have expected outlaws to carry. Blackbeard’s pirates enjoyed their money as they earned it.

They knew life was short and, tomorrow, they could die.

I’m not saying you shouldn’t save for a house or your retirement or your child’s college fund. But writers are some of the worst folk for second-guessing themselves and holding their work back, editing it fifty times, hoping it will eventually be “perfect”.

You never know when your ship is going to run afoul of the British or be pulverized on the rocks during a storm.

If you keep your writing locked away in a treasure chest, it has no value to anyone. Don’t sit on that novel for 10 years – send it out to publishers. Don’t talk yourself out of sending in that guest blog – you never know if it will be accepted until you try. Don’t be afraid to ask for a raise from your writing client – the worst thing that can happen is they say “no”.

Enjoy the work you do and the life you’ve earned by doing it. Don’t stress out so much.

And give the world a little “Yaarrrrr!”

Are you a writing pirate, a scurvy word-dog, or a landlubber?

Steff Metal is a creative copywriter, illustrator, and medieval swordfighter from who believes every word you write is worth fighting for. You can get her weekly newsletter of marketing tips when you download her FREE ebook: Unleash the Beast: Releasing Your Inner Creative Monster.