The Princess Bride Guide to Copywriting 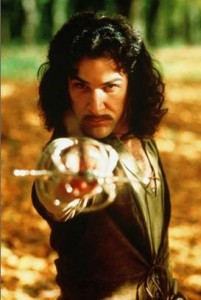 So there have been a lot of other posts around the blogosphere lately about the Star Wars Guide to Blogging and the Bridges of Madison County Guide to Marketing and I realized that at Men with Pens, we don’t really draw from pop culture for posts.

Then I realized that this is because James doesn’t do anything but work. His most common response to analogies of mine is, “What’s that?”

There I stand, agape, saying incredulously, “You don’t know who Joss Whedon is?”

“No?” says James. Then, a moment later, rather timidly: “Should I?”

Oh, my poor, sweet James. This post is for you, so that you’ll go out and watch The Princess Bride again and again until you have seen it at least a dozen times.

Without further ado, allow me to introduce The Princess Bride Guide to Copywriting. In writing this guide, I realized that most of my salient quotes came from the same character. Evidently, everything I needed to know, I learned from Inigo Montoya.

The first line anyone thinks of when the Princess Bride is mentioned is this one: “My name is Inigo Montoya. You killed my father. Prepare to die.”

This is not the best line in the movie by a long shot. My personal favorite line is, “There’s a shortage of perfect breasts in the world. ‘Twould be a pity to damage yours.” Especially because it’s so rare you hear an attractive man use the world “‘twould” without sounding like a complete twit.

However, the line where he names himself is the line that people remember most. It’s the line people say to each other at showings of this movie. It’s the line they quote to one another afterward. And it’s a pretty awesome line. But that’s not why they remember it.

They remember it because the line is said, word for word, a grand total of six times, nearly one after the other.

Repetition makes people remember what you had to say. Use that to your advantage in your copy. Repeat what you want your customers to remember over and over again, and if you can, use the exact same words.

When they think about what you wrote, the words you repeated the most will be the ones that stuck in their heads. And if you can make those words as enjoyable to remember as Inigo’s line, they’ll not only remember you – they’ll remember how awesome they thought you were.

And Inigo is absolutely right.

If you use the wrong words as descriptors in your copy, it’s going to make you sound like an idiot – especially if you clearly think you have the right word. Double-check the meanings of any words you enjoy using the most, and be sure you’re using them properly. You don’t want to end up like Vizzini, do you? Of course not.

“Let me explain. No, there is too much. Let me sum up. Buttercup is to marry Humperdinck in little less than half an hour, so all we have to do is get in, break up the wedding, steal the princess, and make our escape. After I kill Count Rugen.”

Clear, concise, and above all short as can be. To get that information, the audience watches approximately 45 minutes worth of movie. Inigo sums the situation up in a few brief sentences, and Westley (who has been inconveniently dead all that time) is immediately as appraised of the situation as we are. In about one-thousandth of the time.

Now, the only reason the audience stuck around for that 45 minutes is because Miracle Max was in the movie, and Miracle Max is wonderful. If we had to listen to Inigo telling that whole story word for word, we’d have gotten bored and run off.

If you want to explain something – anything – to the people reading your copy, do it fast. Summarize. If you can’t summarize it, walk away and come back and try again. Anything important can be communicated in just a few sentences. If Inigo can do it about a plan to bust into the castle and rescue Buttercup (and kill Count Rugen), then you can do it about whatever you’re writing copy on.

Shorter is sweeter, folks. If you want proof, come on into the comments and list off your favorite quotes from the Princess Bride. They’ll all be short. They’ll all be amazing. And they’ll all say a lot more than they originally appear to say.

Which is to say, they’ll all be damn good copy.

So throw ‘em out. Princess Bride quotes, anyone?