Why Cliffhangers Keep Readers in Your Raft 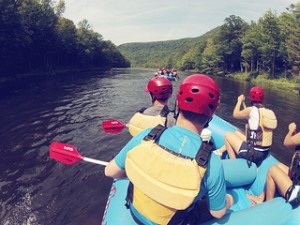 Some years ago, a few friends, my wife, and I took a one-day rafting trip down the Payette River in western Idaho. I made the arrangements, and without consulting the rest of the party (nice guy that I am) I opted for the most difficult route that the outfitter offered, a journey that included several Class 4 rapids.

The guides were dead serious when it came to instructing us about safety. And as they handed out paddles and strapped us into life vests and helmets, one friend turned to me and pointed. “I’m going to kill you,” she said. She wasn’t entirely kidding. (Then again, she might’ve refused to get into the raft, but she didn’t.)

Hours later, when we’d emerged from the river without a scratch, every one of us was smiling. Ear to ear, in fact. We’d faced our fear and conquered it, but only, everyone conceded, because we’d had good guides steering us around the big rocks.

Suspense in storytelling is like a trip through those rapids. It starts with anticipation and uncertainty, and it ends in calm water with the glow of an adrenaline rush. In between, if the rapids are big enough and the guide knows what he’s doing, you fly high on manufactured momentum.

Why manufactured? Weren’t those rapids real? Yes, but everything about our trip was as controlled as could be, albeit by an almost unseen hand. The guides rode in the stern, steering while we faced forward. During calm stretches, our jobs were to paddle.

But in the most dangerous parts, we were pretty much just along for the ride.

So it goes with good storytelling. Everyone who’s along for the ride knows there’s technique involved, but most of it is hidden from all but the most discerning eyes. At the moment of greatest thrill, we understand for sure that someone’s manipulating the raft. Yet we no longer care, because we’re having too much fun.

In the realm of storytelling, cliffhangers are Class 4 (or 5!) rapids — with one crucial difference: there’s a cutaway from the action, and we don’t learn before nightfall whether our hero will make it out the other side. Because the author cuts away from the action, it’s a more blatant manipulation of the audience than a rafting trip made to sound more dangerous than it really is. Yet the cliffhanger remains among the most effective techniques in storytelling.

1. Readers care about the people in the raft.

The storyteller must do whatever he can to make us care, or the rest is moot. If the reader hits the rapids without a rooting interest, there’s no real danger from his perspective. The raft may as well be empty.

Mostly we care about characters who are interesting, who have something at stake (besides their own lives), and who have a little piece of us inside them.

That last part can be hard for a writer to pull off, but if he does, it’s not just a character in that raft — it’s the reader.

2. Readers know the rapids are coming.

Does the guide tell you about every rock and eddy in the rapids before you set out? Of course not. Anticipation is half the fun. And suspense dissipates the moment we learn what happens.

But those helmets and life vests are a tease that suggests: This is going to get interesting.

We humans have an inherent curiosity about danger. When we hear something scary on the next block, we can’t help but peer around the corner to see what’s happening. When we’re sitting in a creepy movie, we cover our eyes but continue to peek between our fingers.

Once the expectation of danger is set, most of us can’t help ourselves. Our very genes want to see things through to the end.

3. Readers had to paddle in the beginning.

It’s always a little bit of work to get into a story, and reading is more taxing than, say, sitting in front of the television.

But that’s also what makes it more rewarding in the end. Because we expended some effort early on, we’re invested in the outcome.

When I was on safari in Zimbabwe years ago, we took hikes every day into dangerous territory. You learn pretty quickly in that scenario why humans invented weapons. Many of the animals were bigger than us, faster than us, and more ruthless than us.

Yet we went out into the bush on foot every morning with this guide because he had two things: expertise and a large rifle.

The guide proved his expertise early in small ways. And by the time danger approached, we felt confident that if his expertise didn’t get us out of trouble, his rifle would.

In similar fashion, the writer of a story establishes his control early. Then, when things get dicey, the reader, whose suspension of disbelief has been tested, willingly remains in the raft.

5. Readers know the water’s calm on the other side.

When we climb into that raft, most of us accept the illusion of danger, but we don’t voluntarily accept much real danger.

If the guide told us in seriousness that we were heading for Class 6 rapids (which are impassable), we’d leap out of the raft before we set eyes on whitewater. If the guide said the rapids go on forever, we might choose something safer to do with our time, like join the marines.

It’s the same, in a sense, for the fictional cliffhanger. The character may or may not die, but by the time we’ve reached the cliffhanger we expect that we’re in the hands of a competent storyteller (see No. 4), and in any good story some semblance of order must assert itself by the end.

That doesn’t mean the ending has to be happy, by the way. The reader may emerge from the rapids in tears. But he emerges into calm water. Equilibrium.

We all know the modern cliché about life: It’s not the destination; it’s the journey. The cliffhanger is a milestone along the story-journey. As such, its very instability is what the reader most relishes.

Picture that moment. The water in front of you has suddenly gone to boil and there’s no turning back. But just when you wonder whether the raft will capsize, it stabilizes.

Elation follows. You made it. Still water ahead. And, most important, your butt never left the raft.

This dude can write.

He also wants you to write (yes, you) and take a shot at his Cliffhanger contest … even if you've never written a lick of fiction in your life. Are you brave enough to rise to the challenge?

I dare you. Take a break from business, have some fun and try your hand at some storytelling. It's good for you… and so is the Apple iPad Mini you could win!

For more contest information, check out his Facebook page.

J.E. Fishman is author of PRIMACY: A Thriller, which Kirkus Reviews called "more fun than a barrel of overgrown monkeys" and Publishers Weekly called "an appealing debut thriller." His mystery novel CADAVER BLUES was serialized weekly in 2010 on The Nervous Breakdown and recently published as e-book and paperback. His latest book, THE DARK POOL, is a financial thriller based off of the evils of Wall Street, out in February 2013.

When he isn't writing fiction or blogging, Fishman--a former Doubleday editor, literary agent, and ghostwriter--works as an entrepreneur. He divides his time between Chadds Ford, Pennsylvania, and New York City. For more information, follow him on Twitter at @jefishman, or head to jefishman.com.