How to Deal With Writing Criticism 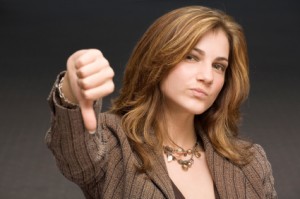 Criticism may not be agreeable, but it is necessary. It fulfills the same function as pain in the human body. It calls attention to an unhealthy state of things. – Winston Churchill

Dealing with criticism is one of the most important skills you have to develop to be successful in writing – and in life.

I used to get really hurt and instantly defend myself if I received any type of hateful email. And in the beginning of my podcasting days, these weren’t uncommon.

I remember being crushed every single time I read one. I had put so much thought, heart and research into what I was doing, and yet here I was enraging people.

Looking back now I feel those people had a point, even though they could have conveyed their messages a little more nicely. I’ve found it’s better, both personally and career-wise, to take criticism in before dismissing it or feeling sorry for yourself.

I wish it hadn’t taken me years to learn, but I finally developed a few ways of turning criticism – even really harsh criticism – to your advantage.

The most important and hardest part about being criticized is to listen to the other person without interrupting. It’s natural that you immediately want to defend yourself and your actions.

Wait it out. Criticism can be hard to hear, but the other person is trying to tell you something they feel passionate about. Hear what they have to say, in its entirety, before you start talking back.

Be open to criticism

When you’re criticized, don’t shut down and let the flow of words wash over you. Instead, try to be as open as possible to what your critic is saying. Sometimes it takes a while to realize that the criticism wasn’t far off base.

Consider the nuggets of truth. The way the person is expressing criticism may be awful – but they may have some valid points that save their communication from being a complete waste.

Yes, sometimes people criticize you because they don’t like you, are bored or have their own issues. But when someone genuinely criticizes your work, you should try to push your ego aside.

Remember that you and your work are entirely separate entities. When it comes to your work, try to be as objective as possible and detach your self-worth from what you’re doing.

The more questions you ask your critic, the more clarifications you get. It’s important to realize sometimes people like to criticize others “just because”. But others mean well, more often than not.

Once you’ve gotten really good at dealing with criticism, asking for it can be a useful way to bring your work to the next level. The more regularly you ask trusted mentors or colleagues about their honest opinion, the better the chances that you’ll improve your skills.

This is by far the hardest thing to do. Taking criticism well is valuable, but it isn’t the end of the story.

After you’ve considered what the critic has shared (maybe even realized that there is some truth to it), it’s time for you to implement the critic’s suggestions. Change and growth is a habit. If you simply absorb criticism without acting on it, the entire process of listening was for nothing.

For extra credit, thank your critics for taking the time to let you know their thoughts. Yours is the highest road.

What are your secrets to mastering the art of taking criticism?

Anne-Sophie Reinhardt is an anorexia survivor, self-love ambassador, body image expert and the owner of aMINDmedia. She’s the author of The Ultimate Guide to a Healthy Body Image and empowers you to achieve a healthier and more successful life by returning to your true purpose and values.