Dangling Participles: What They Are, and Why You Should Care 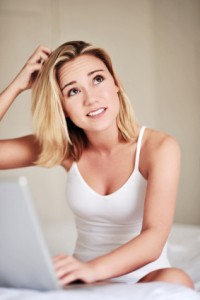 Remember “dangling participles” from back in grade-school English class? Probably not, but chances are you create them every day. They’re a major grammatical error, and once you know how to spot them, you’ll find these little nasties everywhere… probably even in your own content.

Rather than subjecting you to a boring definition, here’s a practical example of a dangling participle.

Did you catch the error? The example is right there, two sentences back. Look closely.

Literally, the error sentence says that “here” (not I, Jessi Rita) has decided to give you an example of a dangling participle. But “here” is not a person, so how can “here” make a decision like that?

To be correct, the sentence should read: Rather than subjecting you to a boring definition, I’ll give you a practical example of a dangling participle.

Dangling Participles Can be Embarrassingly Funny

Still obscure? Don’t worry; it’ll get clearer with a few examples. I remember this next one from my grade school grammar book:

Having five kids and another one on the way, our ironing board is always up.

Yes, I know that dates me (who bothers with ironing boards anymore?), but look at that sentence construction. It’s actually quite funny.

The sentence literally says that the ironing board has five children and is expecting a sixth, therefore it’s always up. The sentence should read: Having five kids and another one on the way, my mother always keeps her ironing board up.

Read the two versions of the sentence (the corrected one and the dangly one) a couple of times until you see why the ironing board is pregnant.

When writing your content, always make sure your participles point to the person or object intended, not to a person or object that takes the sentence in an entirely different direction and destroys your meaning.

It’s not hard to remember this grammar rule, once you grasp the principle behind it … especially if you remember the ironing board.

A Real-Life Example of a Costly Mistake

Here’s a real-life example of a dangling participle from a reference letter. The boss wanted to rave about the talents of an employee he had hired.

Instead, he made the person sound like an incompetent. Here’s what he wrote:

After unwittingly throwing changes and curve balls at the project, Paul kept his patience, his expertise, and his professionalism.

After I unwittingly threw changes and curve balls at the project, Paul kept his patience, his expertise, and his professionalism.

After unwittingly throwing changes and curve balls at the project, I was impressed with Paul’s ability to keep his patience, his expertise, and his professionalism.

See why it’s so important to become sensitive to dangling participles? You can literally create the opposite message of the one you intend by inserting this error into your content.

At best, dangling participles make you appear uneducated to your readers. At worst, they make you look ridiculous.

Here are a few more examples, to help you better identify these little monsters:

Incorrect: Having been trained in a publishing house, you can trust that my editing will be error-free.

Correct: Having been trained in a publishing house, I deliver text that is error-free.

The second version says that the writer of the sentence has the training: “Having been trained in a publishing house, I …”

Incorrect: Having sprouted beautifully, I transplanted the seeds from the starter tray to the garden.

Correct: Having sprouted beautifully, the seeds were transplanted from the starter tray to the garden.

In the first version, the writer of the sentence has sprouted: “Having sprouted beautifully, I …”

In the corrected version, the seeds (not the human being) grew roots and shoots: “Having sprouted beautifully, the seeds …”

Incorrect: Dancing with John at the wedding, he surprised me with his agility.

Correct: Dancing with John at the wedding, I was surprised at his agility.

In the first version, John is dancing with himself and doing the surprising: “Dancing with John at the wedding, he …”

Your turn now: Which of the following two sentences is the correct version and which holds the dangling participle?

Wanting only to please, Sam said the wrong thing at the wrong time anyway.

Wanting only to please, the wrong thing was said at the wrong time anyway.

If you see that in the second sentence, the wrong thing wants only to please, you’re getting the idea. (The first sentence is correct.)

Now that you’re conscious of dangling participles, you’ll start to see them everywhere, and thankfully, they’ll start showing up a lot less in your own writing!

Jessi Rita Hoffman is a book editor who helps authors get their books out of their heads and into print. A former publishing house editor in chief, she has edited books for Donald Trump and bestselling/award-winning authors. Visit her blog for writers here.