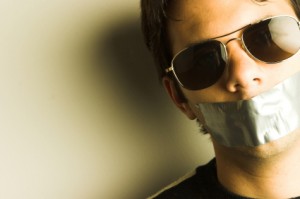 The worst piece of writing advice I ever heard was to write the way I talk.

The next time you have a conversation, listen to yourself. If you wrote the way you talked, your writing would be riddled with space-filler words and phrases such as “like” and “um” and “you know what I mean?”

You’d rely on your inflection to make your meaning clear. Your vocabulary would go right down the toilet. And if you’re anything like me, you’d curse a lot more than palatable for your average business website.

Write like you talk always struck me as incredibly foolish advice.

In fact, I think writing like you talk is half the impetus behind some of the poorly written articles I review for guest posts on this blog. So many people out there think it’s a great idea to start a post the way they’d start a verbal conversation:

No. I’m wondering why you’re writing the start of an article the way you’d introduce yourself at someone else’s family reunion.

I have a lot of prejudices against this advice of write like you talk, but I recently read something that made me reconsider.

Maybe the problem isn’t writing the way we talk.

Maybe the problem is that we don’t talk well enough.

Advice From Someone Who Writes More Than I Ever Will

There’s an essayist, a very contrarian sort of writer, named Christopher Hitchens. He showed up in a Flavorwire collection of “Helpful Advice from History’s Fastest and Most Prolific Writers,” and his little blurb actually gave the hated advice: “Write more the way you talk.”

Well, obviously, I was not pleased.

I didn’t even know who this guy was, but clearly he didn’t know what he was talking about. I read the rest of the blurb just to prove it – and then Hitchens changed my mind completely:

To my writing classes, I used to open by saying that anybody who could talk could also write.

Having cheered them up with this easy-to-grasp ladder, I replaced it with a huge and loathsome snake: ‘How many people in this class, would you say, can talk? I mean really talk?’

That had its duly woeful effect.

So here’s my amendment to the hated advice:

Write the way you talk – if you can speak persuasively, eloquently, and clearly.

Which brings us to the next question: what do you do if you can’t do either?

Be Aware of Your Words

Most of the time, we’re not terribly aware of how we sound when we communicate, either in writing or in spoken conversation. I can’t tell you how many miscommunications occurred because I thought an email was written tersely or someone I was speaking with misinterpreted what I was saying.

We have spats all the time over miscommunication. And yet very few of us are actually aware that we are miscommunicating until someone draws our attention to it by being offended.

The next time you write an email or have a conversation – even if it’s just with your best friend, who knows you well and would know you were kidding if you told her you sometimes have an urge to kick puppies – be aware of the words you choose.

Be aware of how you sound to a stranger overhearing you.

Be aware of how you would react if you heard someone else say the same sentence.

We get so used to being able to speak easily that we treat it like walking – it just happens, naturally, and we don’t need to think about it anymore. Except we do. When we stop paying attention, we’re more likely to stumble.

Stumbling happens in your writing, too.

If you want your writing to improve, then you need to think in a way that communicates better. It’s not easy to pick the right word, both in speech and in writing, but make an effort.

Eliminate space-fillers such as “um” and “like”- they’re usually conveying something in the inflection that is supposed to carry extra information.

Don’t use emoticons to get your meaning across – this is basically the equivalent of smiling to show you’re joking. If you feel you need an emoticon to show that the sentences was meant lightheartedly, rewrite the sentence.

Rely wholly on words, and choose them carefully.

If you want to learn more about writing - in a way that sounds natural, personable and that reaches your readers - sign up today for the Damn Fine Words newsletter. You'll pick up tons of writing tips, and be on your way to walking the talk of writing.

Taylor hails from Boulder, CO, and she blogs for people who are too good to fail over at... well, Too Good to Fail. Go check out her inspiring posts and beautiful encouragement now.