Put up the “Gone Fishing” sign; announce to the world that the Pen Men were taking a well-deserved break, set life on hold…

Wrong. When the predators take to tall grasses, they disappear and leave prey with a false sense of security.

Expect the unexpected. It was the only way to operate under these circumstances. Canukustan may have been on to the boys and their methods, but the famous daring duo were always two, if not three, steps ahead of the competition.

That’s what made Men with Pens so great.

There was no way in hell he’d allow James’ idea of making one of them bait. Too risky. The plan that unfolded from there was brilliant.

It all began with one too many episodes of Myth Busters and a remote control car. Harry knew they’d need a diversion. The hits were getting tougher. The blogosphere was hitting back, and this was nothing at all like last week’s hit..

Harry pressed the button of the radio and brought the small box to his mouth. “Comment King. You in position?”

Static, then a voice. “Roger that, VoR.”

“I’m setting it up now. Get ready.” Harry tucked the radio in his back pocket and gave the seat belts wrapped around the crash-test dummy one final check. He shut the driver’s side door and took a last look at their handiwork.

From a distance, it was perfect. There was the driver, baseball cap and shades on. There was the passenger, arm cocked and elbow resting on the window. They’d even added fake hair to help the dummies pass for real flesh and blood.

He took out the radio. “It’s a go, CK. Get the car going. Take it nice and easy and try to keep the car on the road until I can get into position.”

Today’s drive-by is Head Rambles, the blog of Grandad. Here’s how the site looked at the time of our visit: 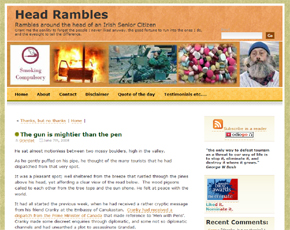 First impressions aren’t so great. What is this site about? There’s a car on fire, a .50 caliber, some drugs and an image that may or may not be Grandad himself. The mental associations going on with such hard images make the blog one that would probably attract a lot of the wrong type of people – unless that’s what Grandad wants.

The tagline explains it well, and that’s great, but we’d be cautious with the nationality association and perception. It’s far too easy to associate “Irish” with the pictures going on, and that may only increase the perception that the Irish are car-bombing drug lords that look like Relic from the Beachcombers.

Remove “Irish” and put it in the about Us. Remove the drugs, guns and car bombings, unless you want to enhance and play up the negative perception. There are other ways to do it without such jarring images, though. A personal blog with outspoken views is great, but a picture says a thousand words and it’s important to be careful.

The overall design is pleasing enough. Colors are muted, appealing and don’t hurt the eyes in any way. They blend well together also, and nothing clashes. You could put the secondary tagline next to the title and thus bring up the content a little more, but it’s not necessary.

The third tagline is very tiny and barely legible. And as a personal mantra, it might be good as a text box in a sidebar widget.

The top navigation is crystal clear and simple. Nice disclaimer, good one. Consider adding an Archives there, because you have a lot of content for people to browse.

On to the sidebar.

“Hall of Infamy?” What does that mean? Who are these strange people? Are those names? Links we should click? Be clear – never clever. Call it like it is: Top Commentators. Ahhh, now we get it.

Remove the Pages widget. It’s repetitive and extra clutter. The calendar is also a waste of space. Remove the archives as well (because you’ll put them in your main top navigation, right?)

In place of the Blog Award widget, have your category list (call them categories; not tags) and place it above your top commentators. Trim down your categories, too. There’s no need to have a million options. Keep that list to 10 and label them properly so people know what it is they’ll receive when they click.

A suggestion for the blog links and websites – you have a lot there. You could remove them (why drive traffic away?) or whittle them down (you have a ton), or you could create one page called “Links and Resources” and gather everything there. Keep the clutter to a minimum.

Remove the Big Word Project widget – I’m not even sure what that is, beyond a button sitting in your sidebar. Cut out all those unnecessary buttons below it, too. If you want to show off your feed reader stats, place that underneath your RSS button at the top.

Cleaning up your sidebar would let you put the awards up a little higher. For the sake of this type of blog, we’d leave them in – they enhance instead of detract. But way down like they are now, they’re invisible and useless.

Having your Adsense at the bottom of the page is completely useless. If you’re going to do Adsense, put it in people’s faces at the top above the fold.

Way up high from his perch on the cliffs, no one could see him. No one. He lay on his stomach, his tongue sticking out in absolute concentration as he maneuvered the car below.

Remote control in hand, he steered like a Nintendo Wii professional. Thumbs pushed the small joystick, there was a lever for speed, and everything was going brilliantly according to plan.

Across and further down, Harry had crept silently through the brush and taken position long before. Undiscovered, he lay on his stomach too, sniper rifle in hand, scope on, and deadly still as he waited for the right moment…

One shot rang out.

Jamie’s thumb jammed down on the big red button and he slammed the joystick to the right. The car swerved and hit the guard rail. “Syanara, dudes,” James whispered as the crash test dummies plummeted to their death.

And there he was. The victim, acting like it was another day in the park. Five seconds… three…Another shot rang out.

No one outwitted the Men. No one.