“Trust me, James. You’re going to love this.”

Just the word ‘trust’ set off radars in James’ head. And the thought of sushi brought on all kinds of associations of eating raw fish and other yucky things he would rather not think about.

So he perked up and tried distraction. “How about McDonald’s instead? Cheeseburgers are good. Mmm… cheeseburgers…You like those.”

“No, sushi’s fine, thanks,” Harry smiled. He’d been looking forward to visiting this particular sushi bar since last week’s hit and he wasn’t going to be talked out of it.

The silver Solstice pulled up in front of the restaurant. Right away Harry knew this place was a class act. The maroon sign with its subtle background textures in told him this was going to be a five-star dining experience.

At least for Harry. “I really don’t want to eat raw fish,” James winced and sighed.

Today’s hit is Sushi Day, the blog of Allison Day. Here’s what the site looked like when we drove by: 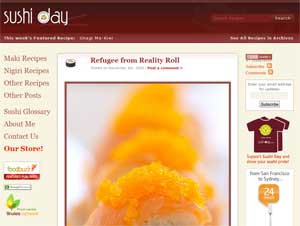 “Absolutely stunning.” Harry stood by the parked car, admiring the design of the sign above. “Look at that. It’s like fine silk. Just your kind of place, James.”

For a class act, this site’s first impressions hit the nail of smooth on the head. The shade of red is a beautiful choice, very grounded and conveying luxurious credibility. The background image is well chosen and subtly placed to enhance effect without being distracting.

The title font is modern yet retains an Asian flavor without the cheesy script or imitation fonts usually used for oriental styles of writing. The lower case ‘d’ that resembles a sushi roll is perfect in simplicity and relevance.

The banner is beautiful yet not at all overbearing or overwhelming. The mood of the site is perfectly set at first glance.

One problem is that the featured recipe link in the bar is so small that it’s easy to overlook, as is the archives link to the side. Perhaps using a different color for the background of the buttons or giving them a border would help. They’re too discreet as is and it’s easy to just slide right by them.

“C’mon.” Harry tugged on James’ jacket, eager to get inside. They walked in and were served immediately – yes, this place was class from head to toe. There was no bustle or loudness, and the room was quiet, yet upbeat and invigorating.

The interior design was laid out in traditional simplicity and functionality, the foundations of everything the Japanese do. This restaurant was no exception. There was no clutter, there was plenty of space, and the room was a delight to the eye.

That lack of clutter and clean space is refreshing, so well done on that. The RSS (although a little small) is where it should be, ads are minimal and blend in well with good color, and there’s whitespace to help keep the fresh look.

The Foodbuzz ad is okay – not sure why it’s there, though, and it doesn’t make me want to click.

The following images of sushi are very nice – the photography on this blog is amazing and magazine-quality clear. However, they come off as just images until we hover over and notice they actually lead to the recipes. Clarify that with a headline at the very least to encourage people to click.

Harry kicked off his shoes and knelt on the pillow, prodding James to do the same. A waitress in a traditional kimono appeared at the sliding rice paper door and handed them both a menu.

“Dude! Look at this!” Harry pointed, his eyes lighting up. “They have a sushi roll named after me!”

The waitress gave him a sly smile and Harry looked up at her. “How’d you know?”

“We have our sources,” she gave a half-bow.

Harry wasn’t sure whether to be flattered or nervous. In their line of business, too much personal information could be dangerous.

James ignored the exchange, scowling at the menu. “Is there anything without raw fish?” The waitress pointed a delicate finger at a selection with smoked salmon, tomato, basil and pesto. “Oh, that looks good. Okay, give me that.”

She took the menus and left. That’s when James leaned over. “I can’t even read half the stuff that was on there. Did you see? Maki, Nigiri…”

We certainly saw. In the left-hand sidebar, the font is huge. Bloody huge, which looks very odd compared to the rest of the site. Yes, you want people to notice that’s your navigation, yes, you want them to click, but it’s screaming big in an otherwise lovely blog.

The titles are clear, though. This type of recipe, that type, the end. Well done. The glossary is a nice touch, too, especially for novices wanting to get into the art of making sushi.

For those titles, we suggest changing “Other Posts” to something more relevant. That’s far too vague to be attractive. What kind of posts? How about “More On Sushi” or even break up the categories into “Restaurant Reviews” and “Book Reviews”?

There’s also an odd break in the navigation, separating the posts from the Contact info and About info. That doesn’t need to happen, so tighten it up.

“I like the pictures,” James whispered. He nudged his chin to the wall, where beautiful pictures of sushi and other restaurants lined the walls. “I mean, the food looks pretty enough to eat…” And it certainly did, though his keen eye noticed the gleaming fish eggs tucked in each roll.

A delicacy, some said. James shuddered.

Just as with any recipe book or restaurant, the main attraction is the food. This blog highlights Allison’s tasty creations beautifully. They aren’t stock photos, and each picture is the work of her significant other, Son. It’s impressive work worthy of a glossy magazine and only highlights the appeal of this blog.

In the right-hand sidebar below the navigation, there are a few more ads, again un-obtrusive and nicely blending in.

There are, however, a large number of links to other sites and we suggest dropping some, as there are just too many. The titles of the blogs are also confusing, because we expect to see more recipes or pages from the Sushiday blog itself.

In fact, that’s what’s missing – tantalizing titles of other recipes and posts in the sidebar. Why not have a small selection of five of the best recipes that you’d like to highlight?

“Are you sure I’m going to like this?” James stared at the sushi that stared back at him while Harry obviously enjoyed his dish.

“You’ll never know until you try.”

He shifted on his pillow. “My knees are hurting.”

James eyed the roll on his plate skeptically. “What if it’s poisoned?”

“Oh, James, for cripes’ sake.” Harry rolled his eyes. “Just eat it already, would you?”

Apologies for having to move everyone ahead a week. But don’t worry… we’re coming. Are you scared?