James was in his glory, knowing he’d be visiting the hometown of his favorite rock star, and he was already trying to get directions through the GPS on the Solstice.

Harry, on the other hand, wasn’t thrilled at all. He would have preferred to stay and linger at last week’s hit. He didn’t like cities. They were big, dirty and overcrowded.

But he couldn’t let James go sniper alone. Who knew what trouble Chartrand would get into?

Harry had looked up the city’s highlights. “Looks like a cultural hotspot.” Detroit had museums, art galleries and lots of night clubs.

“This is gonna be great.” Jamie’s eyes were lit up like Christmas. “A fast hit, whaddaya think? One quick bullet and then we’ll-…” His thoughts tapered off as he peered at the orange and brown building looming ahead.

This week’s hit is The “D” Spot Redeux, the blog of Pamela Hilliard Owens (and Keith?). This is how the site looked when we drove by: 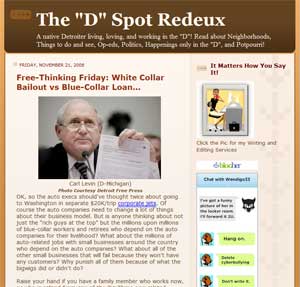 “You brought plenty of extra clips, right?” They were going to need a lot more than one bullet.

Harry just got out of the car and went to the back, opened the trunk and pulled out a double-barreled shotgun. “This is a mess,” he tossed off, and then headed for the building.

First of all, the site is on Blogspot, and we’ve mentioned before how unfriendly that free service is for users. There’s no navigation, it’s difficult to know what’s going on and the two-column layout is restrictive.

Thank the heavens this isn’t a professional blog or a business gateway. We’ve said it before and we’ll say it again, if you want to convey credibility, get off the free services and get serious.

Since this seems to be a personal blog, we’ll be somewhat forgiving.

“What are you doing?” Harry looked back over his shoulder at James, who was still back at the car with his Glock in hand, squinting thoughtfully at the building.

“I’m trying to think of what those colors bring to mind.” A creamsicle crossed with a fudgesicle? A smoothie gone wrong? The brown and orange blocks of color looked horrible, flat and plain.

“Creamsicle,” he decided, and began trudging after Harry.

The design needs some serious help, if only to make those two chunks of color look – somehow – more appealing. There’s a huge chunk of text in the banner with information better left for an about page. I would like to see a Detroit city skyline there or a nice montage of images that represent the city.

The banner is terrible. It’s just a huge chunk of serif font text, with info best left to other locations. Why not a city skyline or an image montage of hot spots?

“What’s that word mean?” Harry pointed to the sign hanging over the door. “Redeux.”

“Haven’t got a clue,” James shrugged. “That isn’t French. I’m not even sure what it is. I’m still trying to figure out what a D spot might be. Sounds dirty.”

No, it’s plain confusing. There doesn’t seem to be anything relevant about the site title and we don’t know what this place is. There’s a humongous tagline going on, which is so long and cumbersome that it’s a complete turn off.

Ditch the name. Get a better one. Shorten that tagline down to something snappy and clear and benefit-rich, not some sales pitch. “Detroit through Local Eyes for All the Good Stuff the Guides Won’t Tell You.” Or something like that.

“Harry?” James stood in front of the building and pulled out his gun. “What do you think?”

“Let ‘er rip,” the grunt came back as the shotgun’s safety came off.

There’s no navigation to speak of, which leaves people no choice but to scroll down a very, very long page to find where everything might be. This is one of the serious disadvantages of free blog sites.

There’s no RSS or email opt-in where it’s expected to be at the top right-hand corner, which means people who land may feel they have no place to sign up. That might explain the low readership – and ditch the feed count chicklet until you have numbers to pull in the social proof effect.

We did find the RSS – three full computer screens down. That’s how much scrolling we had to do before finding it. Get it back up at the top where it belongs. There isn’t a recognizable RSS button either, so put one in.

Next we have the writing services ad in the top of the sidebar. That image is not an ad. That does no good and doesn’t properly convey that you offer serious professional services. Readers shouldn’t have to be told to click an image – if it isn’t clear, it isn’t going to work.

Ditch the image, craft a proper compelling sentence or two and put a link to your services.

Moving right along, the terribly long sidebar ad is nice, but isn’t there better things to put where readers need to see it, such as links to posts, info about you, pages that tell them more… While you have some sort of link selection going on, it’s happening below this long ad. No, no, no.

“How to post a comment?” We highly suggest removing that, because it makes the reader feel ignorant, not helped. Posting comments is one of the easiest features of a blog. The problem is not that readers don’t know how – they just don’t feel compelled to leave their thoughts.

Or they’re lost. There’s so much clutter and advertising going on with posts, not to mention the centering, linkage, etc, that people may be completely turned off from sticking around.

More sidebar clutter in the form of Twit This, Yesterday’s Top Links and especially the big square that says, “Make sure to scroll all the way down!” Our first thought is, “Oh no… there’s more?”

Come on. You can do better.

Keep content left justified to make it easier to read. Centering is great for a headline, but not for much else. Remove the tags – while purists will scream at that suggestion, we just think it’s extra clutter. Change the colors of links so they don’t stick out so much like a sore thumb, too.

One image per post is fine. There’s no need for more, really. Break up the content. Paragraphs should have less than three sentences so that text doesn’t come off like one big block.

Use those paragraph breaks under images, too, so that the text doesn’t jam up against them. We’re not keen on Adsense, either, especially not when it comes off looking yucky and interferes with the reading experience.

As for the sidebar… Just get rid of it all. We can’t even begin to go through every individual element because it’s overkill.

We highly suggest completely wiping it clean. There’s way too much going on in there. Start over. RSS, then three links to recent posts, a push for your services, maybe some comments from other readers…

It’s easy to see this blog wants to earn money. The problem is that all the pushes and pitches are making us feel the sense of desperation.

Also, when we as first-time visitors can’t find a thing and get overwhelmed by everything there is (and we’re used to this stuff), then you can bet that almost every reader is going to be turned off. The more we scroll down that sidebar, the more we lose interest.

This site is just not working, period. It could use a major cleanup and some heavy organization. There are plenty of posts that we’ve written on how to accomplish this, and we suggest revisiting them and older drive-bys to get tips on changes you could make to the basics that would really do this blog some good.

The hit was the most straightforward yet. They just couldn’t do anything here but shoot it up and get out fast. There were bullet holes from the front porch to the top of the eaves. James had reloaded a few times and Harry’s shotgun shells littered the ground.

Another day, and another drive-by with no victims left standing.