Harry sat in the plain white waiting room, leafing through a magazine he wasn’t really interested in. He could hear muffled voices coming from beyond the closed office door. Good, very good.

Inside the office, James sat in the swiveling chair, turning it back and forth and looking uncomfortable.

“Why are you here?” The social worker didn’t seem phased.

“Well…” Good question. “Well, see, I’m a freelancer. Or not, really. An online entrepreneur.” That was more like it. “And I work.” Of course he did. “With kids. I mean, I don’t work with kids, but I have kids.”

“So… Uh… Yeah.” Jamie’s attention slid to the degrees hanging on an otherwise bare wall, the objects on the imposing desk, the plain black carpet. He thought of last week’s hit and how easily that had gone off – at least, for the boys, that is.

This wasn’t easy. James hoped that, at the very least, Harry appreciated the ruse he was now providing. “I thought you could maybe help me.”

Today’s hit is for Antisocial Social Worker, the blog of… Well, some Canadian student working towards a degree in social work. Here’s what the site looked like when we drove by: 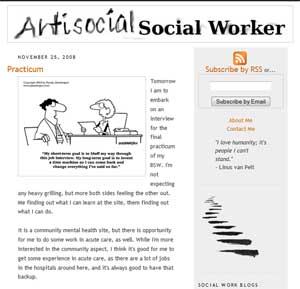 That missing About information kind of sucks. It’s always good to have some sort of name to reference when at a person’s blog – even if it’s a nickname or pseudonym. There is some About information, though, and it’s interesting enough that we’ll overlook the lack. This time.

“So what’s the problem?” The social worker gazed imperiously at James. “You work. You have kids. Do you think you’re special?”

“You’re not. Plenty of people work and have families. Deal with it.”

James winced. “Nice office,” he offered with a tentative smile. “Did you do the décor yourself?”

Or lack of décor. The place is pretty stark and clinical, with black and white being the big theme going on. Thankfully, there’s a touch of colour with the orange, but it reminds us a bit of Halloween.

However, we’ll admit that the scheme works. Black and white can be very effective, and the banner is great. The scrawled font is fun, the title is neat, and we’re happy. It all looks professional yet light.

Also great is the use of cartoons in posts, turning clinical into a newspaperish style. Cool. We like.

What we don’t like, though, are the photo images lower down. They don’t fit the scheme well, and we suggest sticking with black and white cartoons, stick drawings and napkin sketches. Those styles of images are going to fit best and keep the fun side of things going.

“Do you think this is a joke?” The social worker looked down his (her?) nose at James.

“No!” James sat up a little straighter with a look of wide-eyed innocence. Harry? You’d better be doing your job out there…” No, of course not, no joke. This is a very serious matter.”

“Mm.” The social worker lapsed into observant silence, making James squirm. Then he rapped his pencil on the desk. “Do you feel you’re trapped in your situation?”

Trapped isn’t exactly the feeling on this blog, but one of the major problems is the navigation difficulties that free blog services create. There’s no navigation bar on the site, so we can’t easily see what we could click around and enjoy.

The sidebar navigation isn’t the best, either. The RSS is – at least – very prominent and easy to see, so good job on that. But the About and Contact links are very small and easily overlooked.

The quote’s a nice touch and fits in well with the site. It’s poorly split up though, with “stand” being stuck on its own line. If there’s a way to bring that word back up into the second line, the quote would be more visually appealing.

“What do you see when you look at this?” The social worker passed a Rosarch ink blot across the desk to James.

“Uh… ” He stared at the scratches, then looked up hopefully. “Lines?”

“What? Is that good or bad?” Now James was paranoid. “What does that mean? What’s interesting? Did I get the answer wrong?” Shit. Maybe he should have answered a warm, loving family or a man bent over a keyboard. “Wait, can I try again?”

Try again on that sidebar organization. Chuck the calligraphy or brush strokes or whatever those are, because they’re just wasting space. That’s one.

Two, move stuff around. If you want people to stay on your blog and read your posts, then give them the ability to find more posts. Right now, there’s a ton of links to other blogs taking precedence, which only drives traffic away.

Put that blog roll lower down the page and move up the blog archive or a list of recent posts. Follow that with the Adsense Ad (and if it doesn’t make you money within 3 months, ditch it and find something better) and the search bar.

Follow that with books that you’re reading. People are always interested in that sort of stuff. A simple text link, though, isn’t very appealing. Why not display an image of the book cover entice people more?

Then you can put the blog roll, because it does have information and resources your readers might appreciate. (What’s with the timestamp below each link? Get rid of that.)

Also, the blog roll is a long list. We suggest cutting it down to size or giving it its own page. You can then just link to the page from the sidebar with a “Great Social Work Resources” title and save some space.

Out goes the dictionary definition to anti-social. People are pretty familiar with what the word means.

Jamie’s foot tapped impatiently, and he gave the office another absent once-over. I wonder if Harry-…”

“Are you paying attention, Mr. Chartrand?”

Oops. “I was just gathering my thoughts,” James snapped back to attention.

“Well. Gather them after you read this.” The social worker passed over a sheet of paper with some text on it.

The text of the posts could be larger to make the content easier to read. Thankfully, the stark white of the site enhances that reability, even with the smallish font. The links at the bottom of the post, though, such as “subscribe to this feed,” the timestamp and the comments link, are extremely tiny.

So is the date above the posts, and the post titles themselves could be a bit larger, too.

“Shall we schedule you in for next week, Mr. Chartrand?” The pencil hovered over the agenda as the social worker pinned James with smug-looking eyes.

“Oh, sure… Sure, yeah, that’d be great,” James nodded. The appointment was noted, he stood and after a quick, cold handshake, he was walking out of the office.

“All done?” The low-spoken question he asked Harry revealed nothing.

“Yup.” Harry tossed down his magazine and stood. Not a thing was out of place. Not one movement looked anything but casual. “You done too?”

“You betcha.” Hand on the door, ready to leave, he looked back over his shoulder at the monochromatic waiting room. Yup, done as he’d ever be.

And when the police scanner crackled later that evening, reporting a fire downtown, Harry and James exchanged a look.

“…think it’s faulty wiring from the heater… under control. 10-4…

“Huh.” Harry reached over and switched the scanner off. “Doesn’t winter suck.” Then he held up an ink blot. “I see dancing elephants. What do you see?”