How Good is Your First Draft? 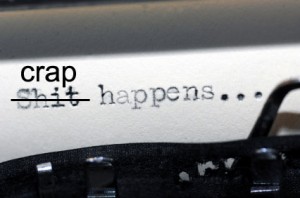 Anne Lamott, in her book Bird by Bird: Some Instructions on Writing and Life, suggested that every writer suffering writer’s block should remember that the person is allowed to produce what she calls “shitty first drafts.”

At this juncture, James would like to say that this is a business blog of the most inoffensive nature, and that I am not permitted to use the word shitty. I pointed out that I was quoting Ms. Lamott, which makes it okay, since if it’s good enough for Anchor Books’ publishers, surely it is also good enough for Men with Pens.

Okay, James. Whatever you say.

I wish to disagree with Ms. Lamott, troublesome to James though she is. Sh . . . crappy first drafts have never worked for me. Mostly because the whole point of writer’s block is that I am terrified of producing . . . well, crap.

“It’s okay,” Anne says, “You are allowed to produce crappy first drafts, because no one but you will see it.”

Yeah, but I will see it. And I will know. And then the shame will haunt me late at night, and I’ll wake in a cold sweat, knowing deep in my soul that I write shitty-… crappy drafts. Even if the draft I turn in is pure and sweet and good, I will know that the crap has been there and that it taints my soul.

So I can’t allow myself to write crappy first drafts, no matter what Ms. Lamott says. I have, however, discovered a way around this dilemma. And that is writing intentionally bad first drafts.

There is a distinct difference.

Crappy drafts, you see, aren’t intended to be crappy. They turn out that way through no will of your own. You’re trying to write well. You are trying, in fact, to write spectacular prose and witty little vignettes. But what you are getting is crap. And Ms. Lamott says that’s okay, just let it happen.

I say nay. I say embrace the crap.

Sit down to write a draft that is intentionally nothing like what you want the finished version to be. For me, this usually involves being a sarcastic minx. If I am asked to write a couple pages of web copy, here’s what my intentionally bad first draft looks like:

“Home page – Man, we’re awesome. So awesomely awesome. Look how awesome we are. We produce services and good stuff and we’re nice to our customers, too. Go team. Man, our awesomeness just gave me a hernia when I tried to lift it. That’s how much awesome we have.”

Now, that’s nowhere near what the final draft will look like. But when I write an intentionally bad first draft, with all the sarcasm and such, occasionally my brain will try to trip me up. It says, “Ho-ho! You’re trying to write a bad draft, are you?! Well, we’ll see about that!”

Then my brain starts to give me some pretty good sentences. It thinks it is tripping me up. I just write the sentences down as though I didn’t notice there were good sentences cluttering up my bad draft.

In about fifteen minutes, though, the joke’s on my brain. I now have good sentences scattered throughout my draft. These are the foundation for my actual “first” draft. The one I send to the clients. Because there was never a crappy first draft. We don’t do crappy first drafts here. Nuh-uh.

We do intentionally bad ones.