What Hunter S. Thompson Can Teach You About Powerful Writing 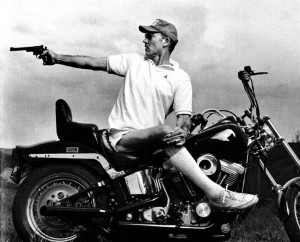 Hunter S. Thompson was the creator of Gonzo Journalism – or as he called himself, “the doctor of journalism” – and the writer of the infamous books Fear and Loathing in Las Vegas, Hell’s Angels: A Strange and Terrible Saga, and The Rum Diary.

Thompson was known for his drug frenzy-filled stories, his use of powerful verbs and wild descriptions, and the ability to tell a story like a journalist.

He was a brilliant, ingenious, erratic writer – fearless, twisted, passionate, and slightly wicked.

Even without sharing the same love for firearms or the deep animosity towards Nixon or the constant drug and alcohol use, any writer can learn a thing or two from this bizarre and vivacious writer.

Steal From Your Heroes

Hunter S. Thompson started by helping out with editing in the high school yearbook. He then went off to the Air Force and landed his first writing job as a sports editor in The Command Courier by lying about his experience. And while attending Columbia University School of General Studies and taking creative writing, he worked for Time as a copy boy for $51 a week.

It was said that during this time he would sneak off into a room with a typewriter and rewrite his favorite author’s books such as F. Scott Fitzgerald’s The Great Gastby and Ernest Hemmingway’s A Farewell to Arms.

He did this because he wanted to understand and learn the magic and flow of a great writer.

Go find your favorite book or author, sit down and use this peculiar practice to improve your writing. Read out loud as you’re typing, and learn the fluidity of remarkable storytelling.

When you use this method, you can:

It’s impossible to write exactly like Fitzgerald or Hemingway, but taking a little bit of their style here and there won’t hurt. It can spice up your writing and assist you in painting a picture with words.

Draw Your Readers in With Powerful Verbs

Hunter S. Thompson was a wizard at showing the reader what he was seeing, not telling them. Readers swore they had visions themselves just by reading his descriptions of hallucinatory drug binges.

People literally hopped in their cars and went to Vegas hoping to catch a whiff of what he’d described.

Verbs are the most important words writers will ever use. They engage and attract the reader like no other part of speech does. They are literally where the action is. They are the words that tell us what’s happening.

As writers, we’re always striving to engage our readers and to compel with our words. Remarkable writing makes the reader feel like they’re a part of the story, as if the scene is happening under their feet.

Use powerful verbs to paint a vision of what’s happening, and your readers won’t just understand it – they’ll feel it.

Engage your readers with powerful verbs and descriptions. Go beyond “to be” variants – we’re trained to skip over them. Use unusual verbs, verbs that evoke emotion and reaction. Find a verb that matters.

When you do, you’re not only painting a picture – you’re letting readers step into the scene and walk in the world you’ve crafted.

Writing requires a lot of discipline — it’s a long tedious, slow, and agitating process. It is physically, mentally, and emotionally demanding to do what we do. It takes more than 10,000 hours and a few gray hairs to master this craft.

Hunter S. Thompson faced adversity and failure on the road to becoming a writer.

He was fired from Time for insubordination.

He was fired from The Middletown Daily Record in New York for damaging the office candy machine and arguing with one of the paper’s advertisers.

He wrote about riding with the Hell’s Angels; several took offense at his descriptions and issued Thompson a savage beating.

In 1960, he went down to Puerto Rico to take a job with the sporting magazine El Sportivo, which folded soon after his arrival.

You may not be beaten by a gang of motorcycle outlaws, or travel to Puerto Rico for a job only to find out the place collapsed, but if you’re a writer, you probably face innumerable roadblocks and hardships.

It’s your mission to turn every failure into a memorable, lifelong lesson – or better, into art. Hunter S. Thompson used his Puerto Rico experiences to write The Rum Diary.

What can you create with your own failures?

If you write, don’t make excuses. Don’t moan about how hard it is. Know that this is something you have to do, and do it to the best of your ability. Create. Strive to be better. Take posts like this one and apply it immediately, now, today, to molding your abilities as a writer.

If you’re a writer, that’s what you’ll be. There’s no use fighting it. Just ask Hunter:

“As things stand now, I am going to be a writer. I’m not sure that I’m going to be a good one or even a self-supporting one, but until the dark thumb of fate presses me to the dust and says ‘you are nothing’, I will be a writer.” ? Hunter S. Thompson

Paul Jun became a writer out of nowhere. Unable to find his passion in life, he decided to teach himself how to become a writer and blogger. He continues to go to school full-time while writing on his website, where he shares insightful tips for blogging, writing, and personal development. He believes with the right attitude you can turn dreams into a reality. You can also follow him on Twitter.