Is Your Life a Runaway Train? 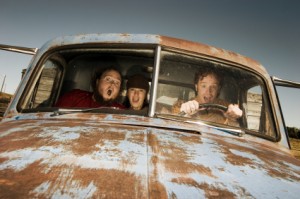 Alex is a good friend of mine, and I’m glad. He and I have this interesting synergy, where just a quick comment out of the blue from one of us sets off the professional radar of the other. I leap on this; he pounces on that. (No one gets hurt in the process.)

Recently, he pounced, and the result was this post. Read it. Print it. Stick it to your forehead if you have to. (You know who you are.) And, of course, enjoy.

If you know James, you know he’s a great guy and an awesome copywriter – but man, is he ever busy. Between running a business, responding to clients, writing posts for what seems like every major copywriting blog in existence, developing projects, and offering cool entrepreneur contests, the guy does not stop.

But he does want to slow down – and yet, he’s not. He’s still running full steam ahead.

He’s like most of you reading this post right now. Freelancers tend to be the busiest people alive, and even more so when they work in the fast-paced virtual world. Everything moves quickly, there are always projects on the go, and if you want to succeed, you have to be on top of everything – and then some.

Many of you are like James. You want to slow down too. You have families. Kids. Hobbies you used to enjoy. Plans. Dreams. Vacations you’d like to take. Some of you can’t even find time to read a book anymore.

How did this happen?

Yes, that’s right. You may have learned about momentum in physics class: an object in motion wants to stay in motion. (Check out Wikipedia for the full geeky explanation.)

Think about your life. You’ve been going full speed for a long time now, and you’re probably on a pretty clearly defined set of tracks, even if your life feels crazy.

You don’t think, you just go. And you keep going. You’ve set the direction, picked up speed and it doesn’t matter what happens around you; your train is on its tracks and can’t stop now. Full steam ahead!

Eventually, however, you start realizing you’re running out of power. You need to refuel. The problem is that you’re so used to whipping past the stations that stopping might be dangerous.

If you apply the brakes too quickly, all the freight cars behind you are going to pile up and crush you. So you need to finesse your slow-down and try to coast into the station without causing a wreck.

How? What brake pressure do you apply? You don’t know. You haven’t touched the brakes in a really long time.

Do they even work?

You need to find that station where you can slow down, coast in, pause, refuel and regroup. You need to determine where you are actually taking all these freight cars and how many of them you really want to pull.

But you can’t stop, or you’ll create that pileup.

Worse, you’ve also realized that if you don’t stop soon, you’re going to run out of energy. Everything will grind to a halt. You’ll be in the middle of nowhere with no chance to refuel.

What can you do? You’re on a runaway train, you have no idea if the brakes work, and you don’t know whether you’ll end up with a pileup or out of fuel in the middle of nowhere.

Do you really want to burn out? Because if you don’t stop, that is exactly where you’re heading. What good will you be to anyone if that happens, especially to yourself?

First: TAKE YOUR HAND OFF THE THROTTLE. Stop giving the train power without hitting the brakes. Applying the brakes and the throttle at the same time will just cause the engine to seize up in a nasty way. Don’t take on any new projects. Finish the ones you have. Start coasting instead of pushing on full speed ahead.

Second: Test the brake gently. Just ever so softly, touch the brake pedal to see if it works. Give one tiny little piece of your normal day to someone else. Testing the brakes when you haven’t touched them in a long time is going to feel scary. It means trusting others to get it done and to do it right, but you need to because you can’t do it all yourself. (And quite honestly, the world won’t end if the task isn’t done to your exacting standards.) Remember, you’re just testing the brakes; you’re not slamming down hard on them.

Third: Pull out a map. Figure out the location of the best refueling station that will allow you to slow down your runaway train carefully. In other words, don’t just hit the brakes and stop doing what you’re doing or ditch the train. Get a plan together to reach the refueling station and follow it.

Lots of people live balanced lives. Most trains stop at every station and many even go offline for service. Other trains substitute for them during maintenance breaks. There are no derailed trains or pileups.

And in the process, you might even realize you don’t like trains. You might want to get off and go try a plane or a boat, or maybe you want to hire someone to drive the train while you admire the scenery at the station for a while.

This post was brought to you by Alex Fayle, who specializes in slowing down speeding trains, helping people read maps and making sure they coast in for a refuel without derailing off the tracks. Even better, he helps people lighten their freight and find new tracks heading to better places. Learn how to drive your train at Alex’s site, Someday Syndrome.