Why a Six-Figure Income Doesn’t Count 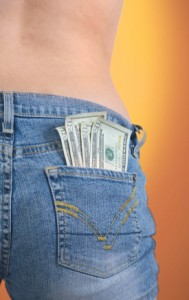 One of the influential mind-tricks commonly used on the internet to boost perception of success is to mention the ever-glorious phrase “six-figure business”. When you hear that, you probably sigh with envy.

Six figures would be nice.

But six figures isn’t really that important. And in fact, focusing on making six figures is often a path that leads to financial loss. Surprised? You shouldn’t be. Impressive numbers are nice, but there’s only one number in the business world that counts:

Think about this for a minute. Success isn’t really that successful if you’re just shifting money around and using income to pay bills. That’s not what you’re in business for, is it? Most likely not. Paying the bills is nice, but those who start businesses want more than just that.

We’re in this to build income that lets us have a lifestyle we enjoy.

But what good is big income if most of it goes to pay expenses and the government takes a chunk on the rest? What if a small income with less expenses and less tax to pay actually ends up creating more money in your pocket?

Which would you prefer? Six figures with five of them going out and paying taxes on the rest, or five figures, and you get to keep three-quarters of it?

Hey, here’s a thought: You might actually be more financially successful than some pretty big guns out there. The problem is that most people don’t realize it. Why?

Because we focus on making money. And we forget to focus on keeping it.

In the first, money comes in and goes back out. There’s a bit left for you to enjoy. In the second, the money that comes in is all yours to keep and spend where you please.

Success is often just an illusion, and what you think you see isn’t always the reality. When you hear about six figure incomes? That doesn’t always mean the person is romping in riches.

If you’re sighing with envy wishing you could bring in six figures, remember that the few thousands you earn now could actually be a mark of better success – because you get to keep more of it.

At least… if you’re focusing on keeping it, that is.

It’s Easy to Focus On the Wrong Figures

Take me, for example. I was recently discussing a new project with one of my consultants. Here’s what he said:

“You did what? Are you insane?! Do you even realize how much this is going to cost you?!!!!”

“Uh… Well, yeah. It cost me $212,” I stammered back awkwardly, a little surprised my corporate decisions hadn’t been met with wholehearted approval. “That’s all. It’s a great idea! I’m going to make…”

The consultant and I talked some more. He asked me to list all the related expenses I could think of, and he really forced me to stretch myself into the future. I found some, sure. There are always costs to every project.

But when I was done listing the expenses I could think of, he listed about $4,000 more in additional long-term and hidden expenses I hadn’t even considered. Not just one-time expenses, but recurring ones, too. They were sneaky administration costs and extra accounting fees that added up sweetly over time.

I hadn’t considered them because I was focusing on how much income the project would make. I wasn’t thinking about how much I would keep. The income I’d make off my $212 investment? It’d be eaten up quickly, and it would bring my beautiful project to a major loss.

And I’d pay tax on the rest.

How to Shift Your Focus for Success

No matter what level of success we enjoy, no matter what kind of business we have, no matter who we are, we all get excited making money – and that’s when we miscalculate long-term costs badly, whether in time or money. That’s normal, too. Most people in business aren’t financial advisors and accountants.

But you don’t have to be a financial advisor to start reaching better success. You can find easy ways to keep more money in your pocket and make decisions that help you figure out which projects get you ahead.

All you need to do is shift your focus – it’s not that hard. Stop thinking about how much money you’ll make.

Start thinking about how much money you’ll keep.

Look at everything you’re doing right now – every single project on the go and every single service or product you sell. For each one, ask yourself, “How much money does this help me keep?”

To find the answer, make a list. Write down direct expenses, because those are pretty easy to spot. Then dig deep to find all the hidden expenses and indirect costs that aren’t so easy to see.

You might be surprised to discover that what you thought would be profitable was really just a disguised loss.

And if it is? Fantastic! You found out now before you lost your money! Invest your time, energy and resources into projects that let you keep more… even if they bring in less.

Want some great resources that help you keep more money?

Check out The Money Book for Freelancers – for people with not-so-regular jobs - and IAC-EZ. This baby lets you keep track of expenses and find hidden money leaks fast.