The Dragons of Writing and How to Fight Them 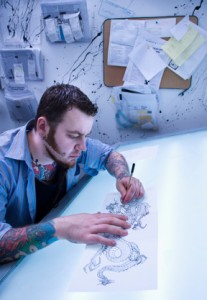 If you are a writer (and you can convince people that this is in fact your profession and that you are not just referring to the three chapters of that novel you’ve had in a back drawer since high school), it is more or less assumed that you are incapable of completing a task ahead of schedule.

This is often painfully true.

My personal theory on the reason for this is that procrastination is kind of exciting. There’s something thrilling about skating into a deadline by the seat of your pants, saving the day just in time, getting all the i’s dotted and t’s crossed.

A friend of mine, having dinner with me, summed it up thusly: “Basically, all you artist types are totally addicted to drama.”

And do you know, I think she’s right.

Or, you know. Something slightly less flashy, but equally gratifying, like money. We writers are very easy to gratify, really.

If you’re into fantasy-type stories (and come on, fess up, most of you are), you can think of each project like being sent on a big quest to slay a dragon. Your client is the king of the realm. The project is the dragon threatening his kingdom. You go out and slay that dragon, and the client will give you a nifty monetary reward. You fail, and so does his kingdom, and he is justifiably pissed.

That’s business-writing. Built-in thrills by the minute. You wonder why we love our jobs.

But what about that novel in the back drawer?

Copywriters By Day, Artists By Night

Copywriters are often also aspiring fiction writers. They may be into writing fantasy, or poetry, or literature or short stories or novellas or restaurant menu vignettes, but almost every single copywriter I know also has ambitions to be a different kind of writer as well. The problem is that in our zeal to put bread on the table, we forget about the fiction writing. It’s not necessary. It’s not lucrative.

And we need that drama. Every year, there’s a writing contest called NaNoWriMo (National Novel Writing Month), where thousands of people are challenged to actually complete that novel they’ve been trying to complete for years. All these people strive to get down 50,000 words or so during that month, alongside lots of other folks trying to do the same thing.

It has an incredible success rate. It is also extremely dramatic. It is full of stress and deadlines and people watching over your shoulder and big sad consequences of disappointment and shame should you fail.

It is no coincidence that writers love the hell out of it.

Creating a Dragon of Your Own

We talk a lot on MwP about copywriting, and we really want you to be successful at it. One of the reasons you got into this business in the first place, though, is probably because you just plain like to write. You wanted to write. This seemed to be a way to do that where you could also make money. And lo and behold, you were correct.

That doesn’t mean you should neglect the writing that first interested you, the ambitions you have on the side. It’s that stuff that’ll remind you what it’s all for. Sure, there’s no pot of gold at the end of it as there is with copywriting, which means you need some other impetus. You need a way to make that kind of writing equally dramatic.

We’re telling you to make your writing into a big enough dragon – with a big enough reward – that it’s worth going after. Your copywriting is already a very big dragon sitting on a big ol’ pot of gold. Now you need some equal incentive to get that fiction writing finished.

And it’s totally up to you.

There are few impetuses as universal as the desire for money, so it’s nearly impossible for me to do this for you. But think about all the reasons you would slay a dragon. Money, sure. What about fame? What about personal welfare? What about impressing the ladies?

What can you do to make your dragon worth fighting?

Maybe you can give yourself a reward.

Maybe you can go on a much-needed vacation.

Maybe you can buy yourself something terribly extravagant.

Maybe you can tell everyone you know that they can expect your novel by Christmas, so that you will be shamed if you don’t deliver.

Go forth! You are both king and hero in this adventure. Set yourself a quest and a reward, and then go claim them for your own. Heck, if you need to, get yourself a king. A teacher, or a friend, or an agent. Someone who will set your quests and hold you accountable to them.

If that’s not dramatic enough for you, then I just have no hope for you.

This is the beginning of a month-long series, where I’m going to talk about how to get into kick-ass shape to fight your dragons, both business and fiction. Stay tuned.