How to Fight Your Way Through the Writing Gap 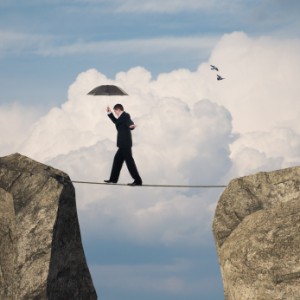 One of the biggest barriers facing a new writer – a blogger, a novelist, a copywriter – is the self-knowledge of just how far away you are from their ideal.

This was because I was highly aware of what Ira Glass calls “the gap.”

Ira Glass has worked in public radio for 30 years, during which he was a reporter and host for several NPR programs like Morning Edition, All Things Considered, and Talk of the Nation. He currently hosts and produces This American Life, and is a well-known and much-loved minor celebrity in the United States.

What most don’t realize about Ira Glass is that from the time he began to the time he became the beloved host of a national radio show, he slogged through about ten years of being truly, self-admittedly bad at being on the air, and another five of being just okay.

He gave an interview in which he tries to describe how difficult that part is, the part where you are confronting the immense gap between where you are, and where you want to be.

All of us who do creative work, we get into it because we have good taste.

But there is this gap.

For the first couple years you make stuff, it’s just not that good. It’s trying to be good, it has ambition to be good, but it’s not.

A lot of people never get past this phase. They quit.

Most everybody I know who does interesting, creative work went through a phase of years of this. We know our work doesn’t have this special thing we want it to have.

And if you are just starting out or you are still in this phase, you gotta know that it’s totally normal and the most important thing you can possibly do is do a lot of work.

Put yourself on deadline so that every week you will finish one story. Put yourself in a situation where you have to turn out the work, because it is only by going through a volume of work that you will close that gap, and the work you’re making will be as good as your ambitions.

I took longer to figure out how to do this than anyone I’ve ever met.

It’s gonna take you a while. It’s normal to take a while. You’ve just gotta fight your way through.

This is an intense and powerful series of thoughts, and I have trouble applying it to my own work, so let’s break it down slowly and look at what this means in practical terms.

You Already Have What You Need

I’ve worked with a lot of would-be writers, and here is the difference between the ones who are going to make it as professionals and the ones who won’t:

If you’re having a hard time as a writer because you look at your own work and you think, “This isn’t good enough,” that’s a good sign. It means you know the difference between what is good and what is not good.

You will never insist that something is good when it is not.

Sometimes they will produce something good, by accident. But they won’t know that it’s better than the bad stuff. The good stuff will get buried in all the bad stuff, because they simply do not have the understanding – the taste, as Ira puts it – to know that it is special, that it should stand on its own.

If you are aware of the gap between where you are and where you want to be, then you have the ability to close the gap.

Closing the gap will take years. That is honestly not negotiable. Even geniuses, even people who were practically born with their blood humming with prose so gorgeous it makes the greatest poets weep in their graves, even those people wrote screeds of bad, bad stuff.

They may have done it when they were five years old. But they went through those years. And so will you.

But you have to go through those years.

If you’ve been putting off starting because you can hardly stand to look at your own work until it is good, if you are waiting for someone to invent a short cut so that you never have to go through those years, you are fooling yourself.

Those years do not get shorter. The end only gets closer if you actually start.

It’s Going to Be Difficult

While it’s completely normal to take those years, nobody ever claimed that “normal” was easy.

It’s normal. But it sucks.

And they will quit.

You can do this. You can say it’s too hard, and you can walk away.

Those years will still be sitting there, waiting for you to go through them, when you decide twenty years from now that you really do want to be a writer.

They are patient. They can wait. You can go through them any time you want.

The question is whether you want to stop being daunted now, or in twenty years.

But I know that in twenty years, I will still be facing it down. I will still want to get across that gap. And I may be too old then, have too many responsibilities, too little freedom.

I may not be able to do it then. And I know I can do it now.

That’s what I can do, right now. I can show up. I can create work that is not as good as I want it to be. I can close the gap day by day.

What I can’t do is wish away those years.

How big is your gap? How many years have you written through? How much farther do you have to go?

Taylor Lindstrom (fondly known as Tei) is a copywriter and journalist from Boulder, CO, who believes that we're all too good to fail. She loves the color green, micro-point Uniball pens, and medieval weaponry.